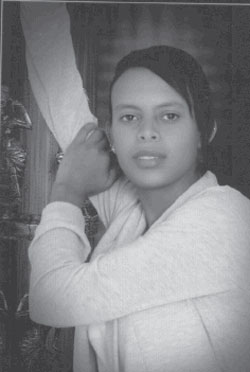 -Well come to this week’s Q&A.

Thanks for inviting me over!

-You have a nice nick name…

Santo? Yeah it is quite a nice nick name. It was my grandfather’s nick name, as I inherited the passion I have for football from him I also inherited his nick name… it came with the package…

-What can you tell us about yourself?

Uhm… I was born in 1993 in Asmara. I lived here my whole life; I spent my time playing football in my neighborhood. There was no other world for me besides football, matter of fact I used to have a hard time at school. I went to Sawa and discovered a whole new world and that’s when I thought that maybe I had to a bit smarter and be a good student as well, I studied so hard and got admitted to the Marine Science college so right now I am a marine student in Massawa.

-Football is your passion. How did it all start?

When I was eight if am not mistaking. You know since it is a pure love that I had ever since I was young I can’t remember a specific date in which I fell in love with this sport but I have some memories of me playing in the field of my neighborhood with the guys that were not of my age.

-Does that mean you only played in the grounds of your neighborhood?

No. growing up I used to play in the teams of my school and also in a team that represented our neighborhood.

-How did you become so good at it?

Well I practiced a lot but there were so many techniques that I learned in a team called Olympic and in Sawa I gained confidence. And a sum up of all this I became quite good of a footballer, even though I still have a long way to go.

-Seems like Sawa left you a lot of memories.

It definitely did. But am sure every young Eritrean has made tons of memories in Sawa, it is a place in which one is bound to have some great adventures. I feel that every and each of us that went through this process feels the same way.

-You were your team’s captain back then right?

Yeah for a short while though I don’t like being a captain.

Because there is this feeling I wouldn’t be able to ever describe in me whenever I am playing. I want to be free, I can’t manage to be ordering while am emotionally playing.

-There is goal that you scored and made you really famous in all of the country’s college.

Yeah. That was actually my pride and joy when I first scored it. You know how we were playing against E.I.T college right? And the match was deadly exhausting honestly we knew that those of the E.I.T were really good so we made enough preparations but the game was not going anywhere for more half of the game and I don’t know how but I scored, from quite half of the court. It was massive at least for me!

-It was definitely massive; your nick name got known quite all over the country.

-So before we end… do you have dreams? Anything that you fantasize about?

God yeah! I want to join the national team. If that could happen I wouldn’t ask for more.

-Well good luck and thank you for being here.

The pleasure is all mine!