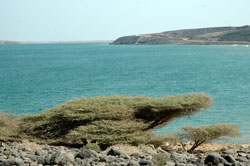 The Southern Red Sea Region is one of the six regions of the country endowed with rich natural resources, spectacular landscapes and historical sites. The region, which is located within the Great Rift Valley of Eastern Africa, is 23, 384 square kilometers out of which 49% is a plain and sandy land and 44% mountainous and hilly. Moreover, the region is endowed with around 30 islands of different sizes. Most of the islands possess spectacular landscapes very attractive to conduct variety of tourism activities such as swimming, diving and camping.  The region comprises four administrative sub-zones with 72 villages and 31 administrative localities.

The population size in the region reaches about 66, 720 of which 85% lead nomadic life and 15% depend on small-scale trade and fishing. The Southern Red Sea Region enjoys different climate including cold and temperate climates in the areas of 500-2000 meters above sea level and hot and warm climate

around the sea shore areas. Seven percent of the region is also covered with volcanic soil and rocks believed to be rich in different minerals that could have the potential in the mining industry of the country. As some historical evidences reveal there have been several volcanic eruptions in the region, the recent volcanic eruption at Siroru a good example for the volatile nature of the region. The volcano the erupted in 1856 was felt beyond the region in some parts of southern Yemen and deep inside Ethiopia. The incident is still remembered as “the year of smoke.”  That of 2010 was also deeply felt and had an impact on lives in Ethiopia, and the ash reached many parts of the Sudan and northern African countries.