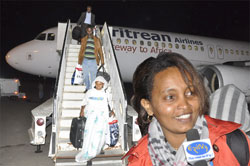 The nationals residing in Europe, US, the Middle East, Australia and African countries said that they highly value celebrating the momentous day in the Homeland as a unique experience of sharing joy of the event.

Ms. Tsige Tsegai and Yodit Gebregziabher, both from the US, indicated that a number of fellow citizens are finalizing preparations to come here for the celebrations.

Likewise, Mr. Tedros Zegiorgis from Sweden and Ms. Fireweini Tadese from the UAE expressed appreciation for the vivacious spirit of nationalism among Eritrean community members around the world. They further asserted that such voyage in connection with Independence Day observances attests to the prevailing strong bond between the people and the Homeland.

Arriving home from the UAE after 27 years, Ms. Birchiqo Kasa expressed satisfaction with her experience of homecoming in coincidence with the great event, and pointed out that it is a good opportunity as regards nurturing cultural and national values in children.