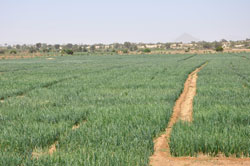 Reports indicated that irrigation farms in Forto-Sawa sub-zone are playing vital role in the locality’s development and improvement of the inhabitants’ livelihood.

Forto-Sawa, 9 May 2013 – Reports indicated that irrigation farms in Forto-Sawa sub-zone are playing vital role in the locality’s development and improvement of the inhabitants’ livelihood.

The local inhabitants said that their livelihood has by and large been improved following the implementation of various development programs in the area, and that they have subsequently become beneficiaries of basic social services, in addition to their resort to community-based style of living.

Mr. Al-Hassan Mohammed Mahmoud from the Administration of Molober area disclosed that the local inhabitants used to lead nomadic mode of living, while they have presently settled as a community thanks to the government’s commitment to rural development. He further pointed out that the inhabitants have started to engage in small-scale irrigation farming ventures. Likewise,Mr. Wohaj Osman, Administrator of Homib Administrative area, explained that Molober Agricultural Project has made considerable impact in raising the community’s awareness regarding modern techniques of farming, and that the inhabitants have been harvesting various vegetables and taff.

One of the farmers in Ruba-Sawa area, Mr. Amanuel Haile stated that the locality is endowed with big potential for vegetable farming.