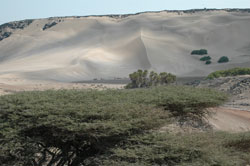 The morning light had broadened, the sky giving way to the morning light giving Asmara a gold tincture. Not a single car was in sight except horse chariots who have taken over the avenues their feet hitting on the street sounding as a marching band; delivering milk. The Association of Eritrean Americans in Asmara had organized a five day trip to Assab. Fifty Eritrean Diasporas from the USA, England, Germany, Italy and Sweden had gathered at 4:00 AM set to travel to the Southern Red Sea Region.

On the morning of April 19th the bus had stopped at the door step of Grand Dahlak Hotel in Massawa. It was a cloudless day of the sort, a day of light heat with an onshore breeze that tossed the leaves and the hair of the young ladies. It was a warning of sort what was to come. If there is ever a region that epitomizes Eritrea’s Beauty, it’s the Southern Red Sea Region. The Southern Red Sea region of Eritrea is located in the rift valley of East Africa. It borders the Red Sea on the east and north-east, the Northern Red sea region on north-west, and Djibouti on south east and Ethiopia on the west and south west. A frenzied sprawl of 1 million people Southern Red Sea Region is the third largest of the six regions of Eritrea and covers an area of 23,384 square kilometers of which 49 percent is plain land, 44 percent mountains and hills and seven percent is of volcanic land. The western part of the region has an altitude of 500 to 2000meters’ that has cool and moderate temperature and the eastern part stretches from zero up to 500 meters above sea level with a hot and dry temperature. The region has a coastline of 500 kilometers in the southern part of the Red Sea and includes 36 different sized islands. Its location makes it one of the most important parts of

According to reports from the region various developmental activities were conduced including economic developments, investments in human capacity building, and social justice and the exploitation of natural resources such as agriculture, tourism and mining. In the first phase of developmental programs; 4 elementary schools, 5 health care institutions, and 22 water supply projects, were finalized. Moreover, a three-store regional finance complex and a public library were built in Assab. The second phase of developmental undertakings between 1996 and 2000, seven health care institutions, two boarding schools, and five water supply infrastructures were put in place.  In addition, the Massawa-Assab road was also constructed anew. Moreover, 71 km of asphalted road that stretches from Assab to the Ethiopian boarder was constructed. As regards advancement in marine resources, four fish preserving and processing plants have been set up in Tio, Edi, Berasole and Assab As part of the endeavors made to achieve food security, about 24 fishery associations have also been established .Third phase of developmental endeavor, seven kindergartens, Tio junior school as well as two additional boarding schools in Tio and Afambo were built. Ten of the 30 schools established in the post independence period were finalized between 2006 and 2010. Dehtun referral hospital in Assab was constructed at the cost of 170 million Nakfa and additional two hospitals were completed in this phase. Supply of electricity to five major towns of the region and more than 62 %of water provision was accomplished in the fourth phase of the 20-year infrastructural activities. By and large, a total of 127 million Nakfa for about 100 water supply projects, 84 million Nakfa for the construction of 30 schools and more than 207 Million Nakfa was dispensed for the construction of Massawa-Assab, Assab-Rehayta, and Assab-Ethipia border roads.  As it is hard to find underground water in such arid areas of the region, about 20 underground water reservoirs have been constructed throughout the region. Hence, as a result of the overall concerted efforts directed towards securing provision of water, 70 % of the region’s rural areas are now getting access to potable water. Furthermore, according to the Ministry of Energy and Mines the South Boulder Mines Ltd, an Australian exploration company, has discovered a very significant potash deposit in Culloli area.

Tourism Development in the region is setting off; underground hot springs found in Sireru, archaeological sites such as buried city of Hasereba situated near Rehayta, and ancient Mosques of Tio and Edi. There are also historical importance of the paintings and stone scriptures in Ayumen, Beylul and other places of the region. Moreover, a new three-star hotel is constructed in Tio to facilitate tourism activities in the region. The renovation of Ras-Gembo hotel could be also cited as an example of rendering good tourism services.

The Southern Red Sea region is a wondrous and vast expanse of hot and dry desert and is known for the hottest temperatures recorded on earth. Be that as it may, it is home to proud inhabitants Afar; the Afar man is tall, dark skinned very pleasant wearing a bushy hair with red strap and a formidable curved dagger known as a JILE strapped around his waist. An Afar woman always dresses flawlessly She wears her olive ebony hair lay on her back and home made nickels around her neck, a neck that reminds one of alabaster. Her skin tone is ebony dark, the skin as smooth as ice-cream. Graceful with an elegant oval face smooth footed walk of a peasant, a narrow waist, small breasts she very often dress in Lewiet and sandals.

Southern Red Sea Region is known for its vast lowland area known as the Dankil Depression and the harshest lunar landscape. The volcanic rock and sand deserts was largely inaccessible its hardship caused by sun and wind had added to its mystique. The Eritrean Danakil elongates some 500 km to the border with Djibouti, sparingly inhabited, topographically diverse; this serrated terrain will always make an impression with its austere beauty. Vast bay, salt pans, volcanoes rise up from flat terrain, landscape that is white and lunar, collapsed volcano, burned stones, black and white mountains, vegetation that is unique green mangrove trees, acacia, yellow fruited gabber trees and plains covered with snow like sand. The Red sea with its different colors at times blue sprinkled with white, golden green and turquoise with its beautiful volcanic and sand mountains shooting out of the middle of the sea as if they are stretching to touch the sky. Ostriches and Gazelle are some wild animals that do manage to eke out and subsist.

In the blue light of twilight one can see the vast plain the town of Foro which used to be a center of trade as far as the Arabian Peninsula using the port of Adulis. Thirty five kilometers from Foro lay Irafaile, a small fishing village the start of Denkalia and a gate away to Buri Peninsula. The vast lowland of Dankil starts low steam that lay in long streamers against its beaches, the whitecaps riffling its shoreline. Galeleo lies south of Irafaile in the direction of Tio next comes Mersa Fatma, it used to be a port city where the Italians transported potash mined in Dallol. Iddi is a pleasant town to spend the night in the out door hotels; its isolation in a beautifully shaped bay, colored huts with good views of the mountains. The landscape returns to more conventional deserter descending into vast plain as you leave Iddi and start to see volcanic mountains that are on the ocean floor. 652 Kilometers from Massawa and near Assab you see Beilul surrounded by Arkokobai looking palms manifesting solemn beauty of the countryside. The road is parallel to the shoreline with wonderful sandy beaches on the coastline. Assab is the region’s capital and is large and modern port city with restaurants and hotels by the sea shore. The Southern Red sea Region is uniquely beautiful, mystic, noiseless and yet busy with so much to offer.