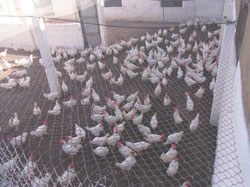 Three kilometers from Mendefera, just on the right and left sides of a village known as Kudofelasi, there exists vegetables farm area.  Situated in the middle of such farm scenery there is a large building which, at first glance, seems as if a new village is being constructed. Up on stepping one’s foot on the very beginning of a courtyard of a huge building, one could only notice of busy workers making moves here and there. The spaciousness of the courtyard makes one feel as is making tours on the streets. The large but which seems semi-finished hall, is just a reminder which makes one come back to the actual senses. The moo sound of the cattle is just a welcoming gesture which gives one a hint of the activities regularly conducted inside this building complex—dairy farm as well as poultry.

How such an investment in dairy farm and poultry succeeded is the very idea that creeps to one’s mind.  The upbringing of the owner of the plant made him to engage in dairy farm and other farm related activities. Mr. Kahsay Haile was born from a farmers’ family and thus the know-how he acquired while conducting routine farm activities enabled him to think of expanding the activities into modern farm practice. He pioneered the activity of modern farm with the livestock of his parents. Step by step, he opened a poultry plant to start with 500 hens and this number was then raised to about 3000. Such an immediate success was terminated with abrupt disease which reduced the number to 600.   The idea of never giving up due to transient obstacles was the very reason which makes Mr. Kahsay keep going on the journey which he had started. Hence, he bought about 3000 hens so as to resume the activity. He now owns about 5,500 healthy hens.

“The primary goal I am adhering to is to ensure diary and eggs supply,” Mr. Kahsay Said. As part of the activities he has been engaged, he is expanding the poultry section for he believes that he is making a mild contribution towards meeting people’s demand. The productions of Mr. Kahsay have been distributed to the markets in Asmara and other areas of the country.

There is a newly founded poultry farm association in the Mendefera sub-zone. Mr. Kahsay has become the first chairperson of the new association founded in this year. Owing to the constant

encouragement it receives from the Ministry of Agriculture the association is expected to make due contribution towards increasing production. Even though the association is a newly founded one, there is a growing interest of farmers who want to join it.

Even though currently working with the total number of 165 dairy cattle, breading of pigs and rabbits is among the future plans of Mr. Kahsay. Parallel to the growing areas of activities, Mr. Kahsay is working to cultivate green animals feed.

Not confined to what he has accomplished, Mr. Kashay is working to expand his areas of activities. The vast farm area he has leveled is an epitome of strict adherence in what he has started. Besides, 15 workers, the entire family including his wife and children are daily engaged in all activities the plant. What could still remain a hindrance is the deficit of animal feed. The Ministry of Agriculture has been the only body which has been providing such demands of farmers. However, the only two animal feed processing plants could not provide sufficient amount. Hence, individual initiatives of farmers could make a difference in meeting their respective demands. Mr. Kahsay is very optimistic that any deficit which stands as a hindrance could only have a transient impact and all would be surmounted and success is inevitable. He said “optimism drives to ultimate success.”

“When I grew up I discovered the beauty of the notes, the melody and the sounds”