“When I grew up I discovered the beauty of the notes, the melody and the sounds” 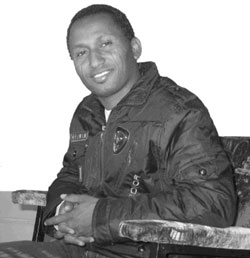 Today’s interview will be done with one of the well known Eritrean vocalists and composers, his name is Mohamed Saleh and he was born in 1974 in the subzone of Mogolo. Ever since he was ten years old he was nourished by musical knowledge in the revolutionary school under the E.P.L.f.

-It is a great honor to have you here with us today. Welcome.

Thanks for inviting me. I am more than happy to share my experience with your young readers.

-Ok great. You joined the revolutionary school when you were really young.

Yes I did. My home town was already in the hands of the E.P.L.F. so when I started learning in that school I was quite happy because I was discovering much more than just ships and everything about the rural life. Plus unlike many others I was not far from home I enjoined staying there. There was a man called Joseph, he was a young soldier back then, he was the one that noticed some talent in me and wanted me to go to the musical school.

-So you liked the school.

Yes very much! I loved it but when I got in to sixth grade our country was finally independent and the war was over so I stayed at Dekemhare, I continued with my studies. I was quiet of a naughty student I hated having bad grades so I was scoring high marks but if going to school would somehow bore me out I would automatically skip a semester or even a year.

-What about your parents, what would they say?

Uhm… you can’t force any one in doing anything. My parents tried but I would not listen. I wish I did though… All the heart ache I gave my mom…

-I guess it’s ok though, you turned out to be a composer at the end of the day. How did you get in to the music industry?

Remember how I told you I learned music at the revolutionary school? I honestly didn’t like it, I actually hated music.

Yeah I was forced to learn music because the guy I told you about, Joseph saw some talents in me. But when I grew up I discovered the beauty of the notes, the melody and the sounds. And we the little knowledge I had from my early childhood I studied and gained more knowledge and became a composer.

-So much for a kid that hated music?

(Laugh). I guess you are right. But now music is my life. I don’t know how I would live without it. Besides I love composing; it’s like giving life to something that was meant to be.

-I heard you are quite familiar with western and oriental traditional music compositions?

That’s true. Music is unique and widely international in its own peculiarity. I admire the most the Chinese musical culture, matter fact when I took some courses on that aspect I tried to incorporate some Eritrean aspects to the Chinese one. I had good outcomes but at the same time I realized it needed to profoundly study.

-Before we end our interview is there any kind of message that you feel like to convey to the public?

Yeah. Especially to the new young Eritrean artist out there. I think they are an important assent to the survival of our music so I’d like to tell them to take it seriously and produce music that defines us and at the same time something that could have hearing ears outside of the country.

-Well thanks for being here. Hope we’ll get to discover more of your adventures in the near future.

I hope so too. Thanks for having me.