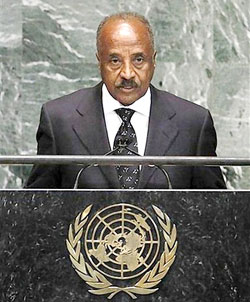 Statement by H.E. Mr. Osman Saleh Minister of Foreign Affairs of the State of Eritrea During The United Nations High-Level  Meeting on the Appraisal  of the Global Plan of Action to Combat Trafficking  in Persons Sixty Seventh Session of the UN General Assembly Agenda Item 103 (Crime Prevention  and Criminal Justice) New York, 13 May 2013.

Statement by H.E. Mr. Osman Saleh Minister of Foreign Affairs of the State of Eritrea During The United Nations High-Level  Meeting on the Appraisal  of the Global Plan of Action to Combat Trafficking  in Persons Sixty Seventh Session of the UN General Assembly Agenda Item 103 (Crime Prevention  and Criminal Justice) New York, 13 May 2013.

It is with a sense of pride and honor that I address this important and timely High-Level Meeting on Human Trafficking on behalf of a people, who for over two generations, have been on the front line of the struggle for dignity and human rights, for themselves and other peoples. At a personal level, it is a privilege and honor for me, as it is for many other Eritreans, to have participated in this just struggle, without remuneration, for two-thirds of my life.

The Eritrean people were among the first in the African continent to suffer from the brutal yoke of colonialism.  Later, their human rights were violated again when they were denied the right to independent statehood that was recognized for other African peoples, simply because the powers of the day decided that their hegemonic interests required that Eritrea be placed under proxy colonialism. Eritreans did not bow down to this logic of force, nor were they cowered, but they responded with a successful thirty-year armed struggle for human rights that entailed the loss of 65 thousand martyrs, the disability of tens of thousands, the displacement of close to a million people and the destruction of the country and its economy.

As  an  independent  and  sovereign  nation,  Eritreans  chose  not  to  look  to  the  past  or  seek reparations, but embarked to rebuild their country, when once again, they became victims of a second war of aggression  that resulted in the loss of 20,000 Eritrean  lives. Even though this senseless war came to an end with the signing of the Algiers Agreement and an international tribunal gave its ‘final  and  binding verdict ‘, 11 years on Eritrean sovereign  territory remains under  occupation   in  flagrant   violation  of  the  human  rights  of  the  Eritrean  people  and international law. Once again, those responsible, those who consider that ‘might is right”, have not been called to account and Eritreans continue to seek justice.

In an effort to silence the voice of the Eritrean people that has been calling for the respect of their sovereign and human rights,  the perpetrators of the injustice, arrogating to themselves the role of accusers, witnesses and judges, imposed illegal sanctions on Eritrea in the name of the Security Council. Today, four years on, the fabrications that formed the basis for the sanctions have been exposed and it has become clear that there is no justification for maintaining them and yet, the injustices continue, which begs the question: where then are justice and human rights?

The Eritrean people, who have suffered the denial of self-determination, two wars of aggression, the occupation of sovereign territory and illegal sanctions, are now facing an additional assault on their human rights and their struggle for redress and justice-organized  human trafficking. This  barbaric crime  is  the  latest  tool  in  the ongoing  attempt  to  drain  Eritrea  of  its  human resources, destroy  the  economy,  impoverish  the people and foment  a crisis  with  the aim  of violent “regime change.”   But even as Eritrea and its citizens- particularly the targeted young people and women-suffer from this hideous crime and its formal request for an independent investigation goes unheeded, the perpetrators have the effrontery to accuse Eritrea of human trafficking. It is the classic case of a thief crying “thief to hide hi s transgression, but again where is justice and human rights?

Eritrea is strongly committed to fight human trafficking nationally, regionally and globally. It has undertaken concrete measures to prevent this crime from happening and mitigating its impact on victims. These include:

1. Enhancing awareness: Cognizant that public awareness about the crime of human trafficking and its many and ever changing manifestations is the first, important step towards its eradication, Eritrea has undertaken a comprehensive campaign strongly featuring trafficking victims, their families and communities.

2. Prosecution of Criminals: This is an important tool in Eritrea’s strategy of fighting crimes of human smuggling and trafficking. Law enforcement agencies and local communities are actively working in identifying and apprehending the perpetuators of these crimes and bringing them to justice.

3. Support   to  victims:   Eritrea   opposes   any   stigmatization   of  victims   of  human trafficking  and  provides  them  with  all  possible  assistance.  Eritrean diplomatic missions and communities in the countries of destination provide them with consular services and other assistance they may require. The government encourages them to visit their country or to return permanently and thousands of them have done so.

4. Regional and international Cooperation: It is the responsibility of states to enact and implement   anti-human   trafficking   laws   and   ensure   that   no   such   crime   goes unpunished. Yet, no state can win the fight alone. Collaboration between countries of origin, transit and destination is also vital to combat this crime. In this regard, Eritrea is closely coordinating its actions with Egypt, Sudan and other countries.

5. Calling for an impartial investigation:  As I indicated earlier, in Eritrea’s case, the crime of human trafficking has become enmeshed with an externally-driven political agenda of destabilizing the country.  It is  not  only  a  criminal  network  of  human traffickers that Eritrea is contending with, but more insidiously, those who are using the traffickers as tools, those who are creating an enabling environment for the crime through generous funding, vicious propaganda, provision of safe havens and active destabilization.  Eritrea  has  solid  evidence  that  individuals  and  groups  posing  as “human rights defenders,” representatives of at least one UN agency and officials of some governments  are implicated.  This is why Eritrea  has officially  called on the United  Nations  to  launch  an  independent  and  transparent  investigation  of  this abominable affair so as to bring justice to Eritrean victims and to a country that is the target of a malicious, concerted and unlawful campaign. Such an investigation will also serve to expose and bring into account not only the criminals who ply their murderous trade for money, but also those ultimately responsible who cynically abet the crime in pursuit of an illegal and violent political agenda.

The fight against human trafficking is ultimately linked to the struggle for peace, stability and socio-economic development within countries and a fairer and more equal situation globally. Even  as  we  pursue  this  comprehensive  approach,  however,  we  are  all  aware  that  human trafficking must be combated in the here and now. Moreover, there is a need to take concrete action,  in the  form  of  specific  investigations  into  gross  cases  of  human  trafficking  and  the violation of human rights, with a view of bringing the perpetrators to justice. For their part, the people and government of Eritrea will steadfastly continue to build their nation and at the same time to expose and fight the human traffickers and their sponsors.