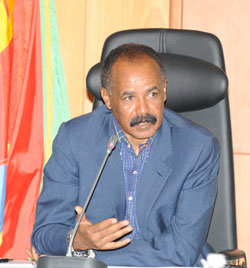 In its meeting today, the Cabinet of Ministers held discussion regarding the all-round preparations underway for this year’s rainy season vis-à-vis weather forecast and the necessary resources thereof.

Asmara, 16 May 2013 – In its meeting today, the Cabinet of Ministers held discussion regarding the all-round preparations underway for this year’s rainy season vis-à-vis weather forecast and the necessary resources thereof.

In opening remarks, President Isaias Afwerki underscored the imperative of not resorting to undue reliance on rain-fed farming, and thus lay emphasis on lasting solution through expanding irrigation farming and addressing prevailing challenges. Moreover, he emphasized the significance of voluntary settlement in irrigation sites and reinforcement of productivity in other sectors to this end, besides the vitality of exerting integrated endeavors on the part of Administrations and pertinent bodies.

Noting the need for resorting to irrigation farming at the earliest time possible while at the same time making optimum use of rain waters, the President said that the available machinery and technological knowhow should be put into effective and extensive use. He further pointed out that a

pilot project has been earmarked for putting into effect this year with a view to laying the groundwork for temporary or permanent voluntary settlement in the agricultural project sites by nationals, especially those living in areas characterized with lean agricultural potentials.

President Isaias went on to lay stress on the need of ensuring higher productivity in other domains such as marine resources and livestock production.

In the course of the meeting, the Ministers of Agriculture and Local Government gave briefings regarding prospects in connection with the

spring rainfall, in addition to the land areas set for rain-fed farming, distribution of select seeds, use of fertilizers, as well as soil and water conservation undertakings, among others.

The Ministerial Cabinet meeting conducted in-depth discussion pertaining to the effective harnessing of resources along with planning and monitoring weather forecasts and reinforcement of irrigation farming in the environs of micro-dams, besides the integration of other sectors as part of endeavors to ensure food security.