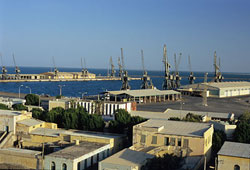 Assab is the capital city of the Southern Red Sea region. Assab is a modern city as well as ancient one. It is also the city in which the Italian colonialists set their foot in Eritrea and there by to stay in the country for about sixty years as colonizers. It was in Ras Lema that an Italian priest by the name Giuseppe Sapeto, on behalf of Genovese shipping company called Rubbatino, negotiated and signed with the Afar Sultan of Ausa in 1869 with the local chieftains for the sale of the area for 8,100 Maria Teresa. The agreement was signed in a ship called Nasrel al-Majid.  That signing ceremony to transfer power from the Sultan to the Italians makes Assab very unique in the history of Eritrea.

Assab was the first to fall under colonialism and the last one to be emancipated from the yoke of colonialism by the Eritrean People’s Liberation Forces in 26 May, 1991, after eighty four years or so of rule by successive colonizers. Since then the city has become an important port for local and international trade. It was chosen for its strategic location near the straits of Bab el Mandeb, and the possibility that it could become an important trading station

between the Horn and Arabian Peninsula. Giuseppe Sapeto not only negotiated for the purchase of Assab but was also responsible in introducing Catholicism in the region. In the center of the city we find an old Church built by him in 1886. Assab now is a modern port. The city is divided into three parts: Assab Seghir (small Assab) on the shoreline, Assab Kebir (big Assab) in the center of town, containing the port and the city center and nestling behind it is the rather shanty town Campo Sudan. There are extensive salt flats around Assab.