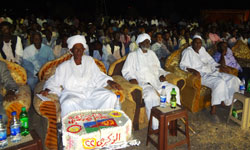 Asmara, 21 May 2013- Eritrean national residing in Gedarif, Sudan, celebrated on 20 May the 22nd Independence Day anniversary with patriotic spirit.

Speaking on the occasion, Mr. Tewolde Rissom, Chairperson of Eritrean community there, indicated that 24 May is a Day the Eritrean people paid dearly to realize and called for nationals to renew commitment to work for the nation’s development.

Mr. Ismail Musa, head of Consular Affairs at the Eritrean Embassy in Sudan, explained that the Eritrean people are exerting strong efforts to ensure social justice as that of mounting staunch resistance to bring about independence besides preserving sovereignty, and that the achievements registered on the ground fully attest to that.

Likewise, Mr. Mohammed Ahmed, Administrator of Gedarif region, indicated that the Eritrean struggle for independence is a good example to other peoples, and that  relations between the peoples of Eritrea and Sudan is built on solid foundation.

The occasion in which thousands of Eritreans and Sudanese brothers participated was highlighted by performance on the part of Benifer Cultural Troupe from Eritrea.