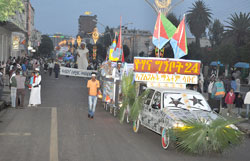 The second part of carnival show by institutions and Administrative areas in the Central region has drawn viewers’ appreciation.

Asmara, 23 May 2013 – The second part of carnival show by institutions and Administrative areas in the Central region has drawn viewers’ appreciation.

The event was inaugurated in the presence of the regional Administrator, Mr. Kahsai Gebrehiwet, Ministers and other government and PFDJ officials, as well as thousands of city residents, reports indicated.

Accordingly, 7 Administrative areas and 20 institutions appeared in the fairground depicting the development accomplishments registered in the country, as well as cultural and national values, besides the opportunity it provides for product promotion. The parade was as usual headed by the National Marching Band, and proceeded through Martyrs and Liberty Avenues until its final destination at Bahti-Meskerem Square.

A number of viewers expressed appreciation for the artistic relativities witnessed in the show vis-à-vis the messages conveyed through them. They further voiced satisfaction with the vivacious spirit of the celebration, besides the fact that the event is being marked at a time when the national development drive has gained added momentum.