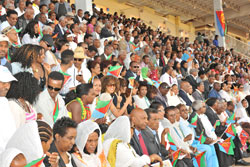 The official ceremony marking the 22nd anniversary of Eritrea’s Independence was colorfully observed today in Asmara.

Asmara, 24 May 2013 – The official ceremony marking the 22nd anniversary of Eritrea’s Independence was colorfully observed today in Asmara.

In a speech he delivered on the occasion, President Isaias Afwerki underlined that the games of hostile plot witnessed over the past 15 years were basically aimed at sapping the nation-building process through fomenting crises, and thereby trying to hold the nation hostage.

The President further explained that despite such conspiracies, the Eritrean people and their leadership were in a position to accurately and timely define their options. He went on to highlight the fact that the nation’s priorities have been focused on all-round and unrelenting nation-building endeavors, in addition to giving the necessary attention to safeguarding national sovereignty.

(For full text of the President’s speech, see the material posted earlier on www.shabait.com )

Military parade, cultural performances and calisthenics show by students added color to the ceremony which lasted for about 2 hours.