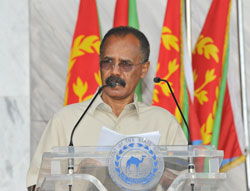 The Eritrean people at home and abroad

First, I would like to congratulate the Eritrean people and friends on the occasion of the 22nd Independence Day anniversary and that of the 20th since the nation’s accession to sovereignty. And I commend those who made major contribution in organizing this auspicious event, namely the National Holidays Coordinating Committee, students, youths and EDF members.

My special thanks and welcome also go to our Sudanese brothers here in our midst for this great event, along with my best wishes for unity, stability and prosperity.

The meaning of this historic Day is to be explained not merely over the past 20 or 22 years, but also stretches over a period of 60 years. Eritrea was entitled to become a sovereign nation right after the Second World War. However, the country was forced to stay under so-called ‘trusteeship’ for 10 years, i.e. ‘colonialism through proxy,’ in a bid to satisfy the appetite of the then prevailing ‘world order’ and the interests thereof. Although we habitually refer to “Ethiopian colonialism,” the fact remains that such a phenomenon amounted to surrogate colonialism under the then existing world order. And this because the Ethiopian authorities of the day lacked the potential to meet the assumed criteria.

When the Eritrean people achieved independence in 1991 through undertaking heroic resistance against successive accomplices of the Cold War and paying enormous sacrifice, thereby ensuring national sovereignty in a legal process, the emerging world order under the hegemony of the USA did not leave room for Eritrea to enjoy the benefit of national sovereignty. The scenarios of fabricated border disputes and hostile attempts aimed at undermining Eritrea’s sovereignty witnessed after independence were not sudden instances. And the fact that our sovereign territory has remained under occupation for about 15 years with the connivance of an external power fully attests to this. Hence, our 60-year-long struggle for independence and sovereignty has not yet come to an end, thus characterizing the uniqueness of the current Independence Day anniversary under conditions of incessant external animosity on the one hand, and the strength of our united resistance on the other. Glory to the steadfast Eritrean people!

The games of hostile plot witnessed over the past 15 years were basically aimed at sapping the nation-building process through fomenting crises, and thereby trying to hold the nation hostage. Despite this, however, we were in a position to accurately and timely define our options. Our priorities have been focused on all-round and unrelenting nation-building tasks, while at the same time giving the necessary attention to safeguarding national sovereignty. However, such a stance caused apprehension among enemy quarters.

•    The major and open crime in this regard pertains to the fact that our sovereign territory under occupation still remains to fall outside the domain of development opportunities, in addition to the continued acts of military aggression resulting from the violation of agreements and supremacy of law. It is an open secret that the sole superpower of ‘the prevailing world order,’ i.e. the US Administration, has impeded the United Nations, including the Security Council, from taking the necessary measures towards ensuring Eritrea’s sovereignty. We are also well aware of the ploys designed to trap us in public relations gimmicks through the involvement of various collaborators so as cause confusion and buy time in a bid to give cover to such acts of crime and terrorism.

•    While the illegal sanctions resolutions imposed on Eritrea 4 years ago on the basis of defamation have already been laid bare, attempts to give them new lease of life through concocting cheap acts of lie are but in vain.

•    The organized crime of human trafficking with a view to draining the country’s human capital and diluting popular resistance to external conspiracies has, in open mockery, not only exposed many of our youths to loss of opportunities but also to miserable plight. Moreover, futile attempts have been made to portray as if the nation’s youths are resorting to migration in order to ‘avoid’ the National Service Program and economic hardships; and this not to mention the cheap acts of trying to implicate Eritrea with ‘accountability’ in connection with human trafficking.

•    Still more hostile attempts were made to expose the Eritrean people to poverty and other forms of hardship, and thereby incite acts of popular restlessness and sap the implementation of the country’s major development programs, besides trying to obstruct remittances to citizens inside the country.

•    It is also a usual enemy attempt to polarize the Eritrean society with a view to creating conflict and instability, and thus undermine the popular resistance drive against anti-Eritrea agendas. One can easily discern that such externally funded cheap acts have been abetted by paid agents and institutions, and that conspiracies of this kind are being fully exposed.

•    It is also worth noting that hostile psychological campaigns aimed at creating diplomatic isolation, imposing cultural contamination and undermining the popular resistance momentum, and the like, have but given rise to added strength to the national resistance drive.

As I have already outlined, the value of our freedom and sovereignty is to be gauged not only in terms of the intensity of enemy conspiracies but also in light of the corresponding popular resistance against such a scenario. It is equally worth emphasizing at this juncture that we don’t need to pay undue attention to acts of sabotage and conspiracy but rather remain focused on strengthening our resistance and furthering all-round national development.

We have acquired added potential and streamlined a number of development programs for 2013 through surveying our resource capacity vis-à-vis the necessary expenditure thereof. Beyond referring to details on this auspicious occasion, further explanation would be given on the opportune moment through the national media outlets.

Still, as the rainy season is on the onset, the nation needs to reinforce ventures in this connection, in addition to the ongoing community-based soil and water conservation, as well as other agricultural activities.

Glory to Our Freedom and Sovereignty!

Glory to the Eternal Legacy of Our Martyrs!