Role of music in the Eritrean Struggle for Independence 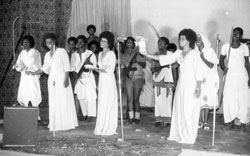 Music playing a vital role in the Eritrean struggle for independence is not only recognized by Eritreans ourselves but also well documented by foreign authors and institutions: used as part of the armory of resistance by the liberation forces.

Traditionally, Eritrean music consisted of group singing, and clapping, in a harmonious choir of mass participation, accompanied by traditional music instruments. This group singing of Eritrean culture is also known for its use to raise the spirit of diligent work during collaborative duties in farming or building houses for members of the community.

As the struggle for independence was forming and as it was not permitted to discuss politics of their country, Eritreans used music to communicate themselves in a way the colonizers could not understand. Artists used their lyrics and tunes to spread nationalistic messages that touched the hearts and minds of the people.

Along with its military offenses the EPLF used education, political awareness, culture, and most importantly music as its weapon.

In the mid 1950s, Eritreans came to realize that their country was slowly trapped unlawfully under the hands of Ethiopian colonizers. The Ethiopian colonizers started controlling the people on what they read and music they listen. To the extent of discouraging them speak the language they know. So Eritrean musician began singing songs describing life under occupation, which resulted in forming small musical groups like Asmara Music Association and Indigenous Music Association with the aim of challenging the foreign culture that was engulfing the country.

Although there were some singers that created songs with straightforward lyrics, many included coded communication in their music so that only Eritreans would be able to understand.

liberated areas music was used to raise the moral of the combatants as well as entertaining them.

Music was almost compared to anesthesia when listened during the worst times of the struggle. It was also an outlet for the Eritrean people, to have their voices heard by both friends and foes that their victory was undisputed. The huge contribution of music to the Eritrean struggle for independence was no less than the use of military armaments.

The Soviet Union and its World Influence