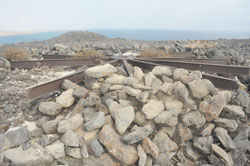 Rahaita is one of the ancient places in the Southern Red Sea region with significant history and tradition. The tradition is still intact. Rahaita had been ruled by Sultanates since 800 years back. The current Derder Abdel Kadir Dawud is the sixteenth Sultan in the ranks of the Rahaita Sultanate. The sultanate is from the renowned Kingdom of Adal established in Rahaita, the kingdoms of Dankali and Ankala, the Sultanate of Bidu and other major clan chieftains and sheikdoms successively dominated the traditional administration on the Red Sea coasts, in the interiors and on the islands as well.

Since the 16th century, the Ottoman Turks had controlled the Red Sea Afar coastal areas with a minimal influence over the territories. The Ottoman rule transferred its nominal authority over the coasts and islands of the Red Sea to the Egyptian Khedive in 1866 but didn’t last long. It was after only three years, on 15 November 1869, that among the Afar chiefs Sultan Ibrahim Ahmed and Sultan Hassan Ahmed signed an agreement with Giuseppe Sapetto, representative of Societa Rubattino Company in which the future colony Eritrea was first conceived as the piece of land in Assab possessed by the Italian company. Soon afterwards, on 10 March 1882, the Rubattino Company transferred all its landholdings to the Italian government. During all these years of successive occupation the Sultanate of Rahaita was intact, respected and observed by the society. The Rahaita Sultanate is one of the four Sultanates in Afar territory. The Afar territory was divided into four sultanates and numerous tribal confederacies that independently ruled and administered themselves.

Among the four Afar Sultanates are that of Girifo and Rahaita which are found in today Eritrea the others are in neighboring countries. All these Sultanates or mini-kingdoms had their way of

The old village of Rahaita believed to be the ancient residence of the kingdom is buried underground eagerly waiting for historians and archeologists to uncover, conduct research on it and reveal the mystery it is holding to the wider world.

Still visible on the ground are the ancient sesame oil mill processing plant. The oil is processed by grinding wet sesame by heavy rounded and specially

prepared rock rotating the rock with the help of an elephant. The drops from the grind sesame produce edible oil believed to be free of fat. The remains of the mill are found scattered on the ground. A special container like for processing fodder food for animals, cement processing from corals and ancient water wells and the burial place of a Turkish man, evidence for the presence of Turks in the area, are some that are still visible ancient historical sites in the village. The very interesting part of the history of Rahaita and its kingdom is that of the organization of the youth. In those ancient times the youth were organized with different categories. They call it Fiema (Youth Organization). The youth are organized into the different units.

The Soviet Union and its World Influence