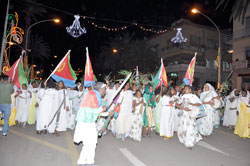 “Free like a bird”, is what the people of Eritrea has been reciting for the last 22 years of independence. A bird flies to the skies without any hindrance and travels to different corners of the world as it wishes. Thanks to independence, Eritreans are enjoying a full-fledged freedom. They travel and work in any corner of the country as they wish. They are making use of any possible opportunity independence grants them. Even though they started to live happily ever since the very Independence Day, Eritreans inside the country and from overseas altogether have annually been enjoying a week-long celebrations of Independence Day anniversary which  always add relish to their day-to-day living.

Every year, Eritreans from abroad flock to their home land to experience the ultimate joy they could have by being among cheerful people. They just want to be in their homeland with fellow Eritreans to receive worm accompaniment to any joyful moment. Mrs. Birchiko Kassa, who came to Eritrea after 27 years of stay abroad said: “It is very unique to be in your homeland, to be part of the Independence Day celebrations and to personally witness any piece of merriment.”

Every Eritrean wants to personally participate in every event of Independence Day anniversary, to make strolls at ease in the streets and thus to observe music shows, carnivals, exhibitions, community gatherings, dramas performances and other sorts of entertainment programs.

The exhibition staged in an open area situated at a place between Justice Ministry’s building complex and Central region’s administration building complex is all about the life style of freedom fighters during the struggle for independence. As regards the aim of staging such a show, Mr. Asefaw Tewelde, chairperson of association of freedom fighters, said that the program for staging such show emanates from the very idea of presenting to the young generation how bitter and harsh the struggle for independence was and how the difficulties were surmounted.

In this year’s Independence Day anniversary, carnival shows in which 13 administrative areas and a total of 41 institutions took part depicted the overall economic progress Eritrea has been registering, its future prospects of all-round growth, cultural values and sprit of resilience of its people. The carnival continued for two consecutive days from 21-to-22 May.

Carnival show of May 21, started from around Bar Zilli and it marched from Sematat Street through Harnet Avenue in the presence and accompaniment

of Mr. Weldemichael Ghebremariam, Minister of Regional Administration and other officials. Similarly, carnival shows of May 22 marched along the streets of Sematat through Harnet Avenue to Bahtimeskerem square. The second phase of carnival show started with the inaugural of Mr. Kahsay Ghebrihiwet, Administrator of the Central region. A number of people flocked to down town to observe the impressive shows.

People from all walks of life flocked to the main streets of Asmara, such cheerful people attract ones attention and makes one forget everything and prompt to be engrossed and happily see every movement. Open music shows, different dramas and other artistic shows staged at Cinema Roma, Karaoke and giving rendition to patriotic songs produced during the struggle for independence and other entertainment shows broadcasted on Eri-TV are among the programs which added color to the 22nd Independence Day anniversary. This year’s Independence Day is commemorated on Friday the same as the very independence day of May 24, 1991 and everybody is as cheerful and overwhelmed with feelings of happiness the same as that very day of 1991.

Eritrea: A country that passed through thick and thin Part II