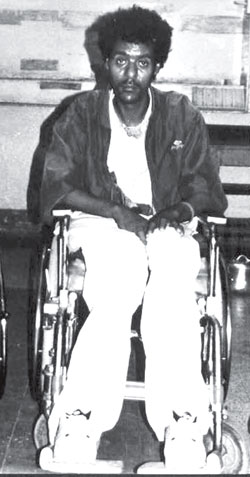 On this special season of the year we are going to have today an interview with a brave young man that lost both of his legs during the struggle for Eritrean independence. Is a true fact that thousands of young men and women have been sacrificed in the process of liberation but once again the Eritrean people had to sacrifice more of its beloved ones to safeguarding the sovereignty of our country.

-It’s truly an honor to have this talk with you. You might as well start by introducing yourself to our readers.

Ok, my name is TeshomeBahata better known for my nick name “WediBahata”. I was born in 1978in Asmara; I grew up in Asmara and just like the Eritrean youths I went to Sawa to take my military training.  In 1998 when the TPLF invaded  our country I knew it was my duty to defend my country and so I participated in the war.

-I heard you were part of the mechanized unit.

That is true; I was with the tank crew of my unit.

-How does it feel to drive a tank?

First of all you don’t do it for fun but still the first time I drove it on my own I was actually so exited.But then in time it feels more like a job you know it is a duty that you must do with no exceptions what so ever. It was back in 1999: the 23rd of February, around eight o’clock in the morning that was my actual first time I went in a war with a tank. It was the second invasion.

-What do you remember of that day?

Hard work of every soldier on the front. It is actually so hard to explain the burning desire of wishing to defend our country’s sovereignty and people, we all had the same feeling. We succeeded at the end of the conflict in one day we burned down more than four tanks of the enemy. We stayed there till five o’clock in the afternoon in my unit that day nobody was hurt. But either ways a war is always a war we had comradesthat lost their lives in the following days.

-How many were they?

Five in one day is devastating. If I had some supernatural power I would do some miracle to finish conflicts with no one loosing life. It is heart breaking, but then especially under those conditions you too take death as a guaranteed thing so you just wish to be the one giving your life before your fellow comrades.

-What about you? Were you fine?

Yeah. But at the end I had my sight damaged: my left eye was slightly hurt.

Well yeah, what is compared to lose an eye compared to losing your life? It is really nothing. Matter of fact when they took me to the hospital of Barentu and after a couple of days I run away from there and joined my unit. At first they wouldn’t give me my position back but whether they wanted me to fight or not I would still join them even if they didn’t want me to, so they gave me my tank back… I insisted like a kid!

-When did you get injured?

19th of March in a place cold Elela. It was a hard battle, the enemy was on its way to Elela and my units were trying to stop the advance of the enemy. God, it was really hard! It was the day in which I got two bullets in my back and one in my stomach in quite of a short time. That’s it after that half of my body was paralyzed…

And then nothing, I was recovering till the last month of 2003. While all of my comrades were fighting I was hopelessly lying in the hospital’s bed, I always felt in depth with them. I could have helped more.

Definitely, I recovered a lot. Not completely but we got our land secured. And we made a statement heard world widely: nobody can touch us, even though the prize in precious we are always ready to sacrifice anything for our people and country. That is the promise young Eritreans made to our martyrs: Keep the sovereignty of Eritrea under any circumstances and at any costs.

-What about your private life?

I live with my family and I have a daughter who just turned 15. I am happy.

-Is there anything you want to say before we end our interview?

First of all I want to congratulate all Eritreans around the world on our 22nd independence anniversary. And I want to thank all Eritrean youths; it is truly a blessing to have such amazing young men and women that work hard in safeguarding and building our country. Every and each Eritrean youth’s dream is to create developed and prosperous nation, I wish them all successes. I am proud to be one of them!

– Wish we had more time. It was a real pleasure to have here with us.

I am flattered thank you.

Role of music in the Eritrean Struggle for Independence