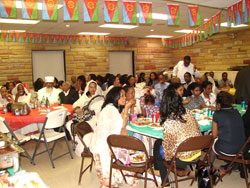 Eritrean community members in the US cities of Denver, San Jose, Cincinnati and Las Vegas , as well as Vancouver, Canada, celebrated the 22nd Independence Day anniversary with patriotic zeal.

Asmara, 28 May 2013 – Eritrean community members in the US cities of Denver, San Jose, Cincinnati and Las Vegas , as well as Vancouver, Canada, celebrated the 22nd Independence Day anniversary with patriotic zeal.

In the celebrations in Denver city in which the participation of youths was significant, the community members reiterated their pledge to honor the trust of martyrs. Moreover, Foreign Minister Osman Saleh sent a message of congratulations to the participants through teleconference, and lauded their role in the nation-building process. The community members on their part voiced readiness to step up participation in State affairs.

Likewise, the celebration in St. Louis city witnessed the staging of different programs by youths targeting the

popularization of Eritrean culture and languages, besides a banquet and traditional dances. Furthermore, the community members said that they are enhancing effort as regards bequeathing cultural values to the young generation.

Meanwhile, the Eritrean community members in Cincinnati expressed appreciation for the development achievements the nation has registered, and asserted that they would enhance role to this end. In this connection, the Eritrean Independence Day has secured recognition by the Municipal Administration of Cincinnati, according to reports.

The momentous Day was also celebrated with fervor in Las Vegas and Vancouver cities.