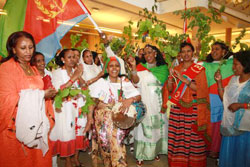 The 22nd Independence Day anniversary was celebrated in various cities of Holland, besides Berlin, and Johannesburg with enthusiasm.

Asmara, 28 May 2013 – The 22nd Independence Day anniversary was celebrated in various cities of Holland, besides Berlin, and Johannesburg with enthusiasm.

The Eritrean community members in the Dutch cities of Amsterdam, Rotterdam and Utrecht reiterated their readiness to back up the nation’s development programs and voice staunch resistance against external conspiracies. Speaking on the occasion, Mr. Solomon Mehari, head of consular affairs at the Eritrean Embassy in Holland, said that the development accomplishments being registered in the Homeland attest to the prevailing readiness on the part of Eritrean the people and their leadership to jointly facilitate the nation-building process.

Homeland, and celebrated the momentous Day in a manner that popularizes national values among the youth members.

The observance in Johannesburg witnessed the staging of different activities, including cultural performances by the South African Cultural Troupe, Umoja. Speaking on the occasion, Mr. Saleh Omar, the Eritrean Ambassador to the Republic of South Africa and the southern Africa region, noted the way nationals cherish independence, and pointed out that the growing popular participation in national development endeavors attest to this.

Reports also indicated that the event was celebrated with a similar spirit by Eritrean nationals in Angola, Zambia, Zimbabwe and Namibia.

Teaching-learning process on pace of development in Qrora sub-zone: Report