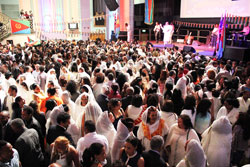 The celebrations witnessed participation of more nationals and friends, besides the staging of cultural, sports, artistic and fashion show, among others. The nationals indicated that observance of the momentous Day is a good opportunity for popularization of national values among the young generation. The community members further reiterated their pledge to back

up national development programs and voiced staunch resistance against external conspiracies, and said that they would become primary beneficiaries of the new investment prospects in the Homeland.

Speaking on the occasion, the Eritrean Ambassador to Germany, Mr. Petros Tsegai, lauded the active role of nationals in the nation’s development drive, and called on them to further enhance organizational capacity.

Likewise, the Eritrean Ambassador to Kenya, Mr. Beyene Rusom, urged community members in that country to play due role in national endeavors of furthering investment.

Also speaking on the separate occasion, the Eritrean Ambassador to France, Mr. Fasil Gebresilasie, congratulated the citizenry, and stated that the event is an occasion when nationals should gauge their input in the nation-building process.

Moreover, a number of nationals lauded the development accomplishments being registered in the Homeland.