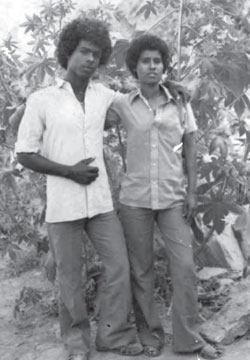 As we were walking through the streets of Mendefera we accidentally got in into a place where a group of people were talking over some traditional coffee, looking from far it seemed that they were talking about something really interesting. We got close to them and before we even asked to join their conversation they invited us to enjoy some cups of coffee. We were amazingly thankful but not really surprised by their hospitality because it is definitely one of the most beautiful traditions of our people. And then we found out the topic of their conversation… they were talking about an amazing ex E.P.L.F fighter that keeps his head and never does boast about his glorious journey as an E.P.L.F fighter and we felt like meeting him and know more about him and his experiences was. We met Mr.YemaneGebreAmlak and he gladly shared some of his past ventures.

-It is true honor to have you here with us. Can you introduce yourself to our readers?

My name is YemaneGebreAmlak I was born in 1964, growing up I was an ordinary Eritrean teenager that hated the situation that we were in back then. I was literary irritatedespecially when I was a teenager: I was mad about the whole thing: indiscriminately killing people, injustice, rape, burning villages… and so on. So at the end I decided to do my part in rooting out the colonizers from our country. So I went to the field to join the revolution.

-How did you come up with the thought of going to the field?

I don’t know. I mean… when it is too much it is too much. And the cruelty back then was more than too much, I hated everything. From time to time I used to see some young afro fighter passing by my home town and I always had news about their victories and I just wanted to be one of them. I stopped studying and one day when I just had turned 15 I run away from home and became a combatant.

-You automatically became a combatant?

No. absolutely not, they wouldn’t let me join them at first; they thought I was too young. I insisted so I stayed. Well, thanks to my cousin: I recognized him from afar and the first thing I shouted at his face was the fact that I wanted to stay. He obviously thought he was dealing with a crazy kid so he tried to make me understand that the war was a dangerous thing and he told me so many thing that would automatically scare off a kid but I was not freighted at all. I asked him why he was still alive if what he was doing was dangerous and he did not have a response he asked me my name and where I came from and then he got so emotional. I stayed with him for a couple of weeks and then I had to be a real fighter so I got transferred to another unit.

-What did you do afterwards?

Well, we got some basic military trainings and the very first combat in which I took part was the in 1981.

-What about the biggest combat you ever took part in?

I participated in the battle of the demise of Nadew Command.

-When did get injured?

Well, it just happened I wouldn’t want to spend your time telling you about a silly thing.

-Before we met you we heard that you don’t like talking about your past in the revolution.

It is not like that. I just simply feel as if there are other people and fellow comrades that did much more, many lost their lives. Every single citizen of our country somehow contributed a lot in the liberation of Eritrea. What I did for this country is what many more did.

-That is totally undeniable.

Even to date many young boys and girls are doing so much for this country. Our country is blessed one its power is its people. Who dearly love it and know the price of freedom and are ready to sacrifice even their lives at any time if it means peace for the country and the people. My journey is similar to many others’ that is why I don’t like boasting about it. It was a great pleasure for me to be with my comrades and fight for the same aim. Some made it alive some didn’t but at the end we showed the world that Eritreans are by the law of the universe the craftsmen of their own destiny and history. Whatever situation is our unity is our power and unshakable. That’s how I feel.

-Honestly, even if there is much more we would want to hear from you about your experiences just meeting an exemplary person like yourself which still feels of what you sacrificed to the freedom of our people as a simple thing, is what makes us to be proud Eritreans: a country of people that don’t want to show off and respect each other. Thank you for being here with us.

The pleasure is totally all mine!

“The right to be free”