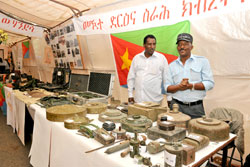 Different kinds of mines, mine detectors, heavy and light artilleries of different sorts, photographic exhibition, utensils which rather seem useless materials among others were items staged in a pavilion which stayed open for about a week as part of the programs organized to colorfully celebrate Eritrea’s 22nd Independence Day anniversary. Saving lives as much as possible was the primary goal of mine detection, destruction and deactivation activities that were carried out by the EPLF. The livelihood of freedom fighters and the weapons they used to have from the more primitive type to a modern one were displayed in the temporary pavilion just next to the building complex of Central region administration.

A large Eritrea’s geographical area was turned into mines field during the Ethiopian colonial era. Destruction and deactivation of mines as well as placing mines in key positions to hinder destructive movements of the enemy was then a routine activity of the freedom fighters. Mines to be placed under asphalted routes within the enemy quarters was done with utmost care by digging a hole and paving in a way the enemy could recognize without leaving any trace. All the activities that were conducted by trained freedom fighters makes one admire their creative ability. All these activities and others has so much to tell which otherwise words could not express.

For there was hardly any advanced mine detecting device, successful demining tasks were conducted only through traditional methods by just using thin metal rods and by piercing the ground here and there. It is important to notice that there were of course new tactics they developed while conducting regular mining and demining activities.  In the latter times, however, the EPLF started to use mine detecting device. This less accurate and outdated mine detecting devices along landmines of different type and some advanced devices was showcased in the exhibition. It is not hard to see the huge differences between the modern and the outdated equipment.

Any observer could not miss a photograph that depict a demining activity conducted by two freedom fighter some 28 years ago. It is surprising enough to learn that the one who was engaging in placing and clearing mines is giving awareness raising briefings to the observers of the exhibition.

It is likely to find different landmines still buried in different fields. Some of the landmines that were discovered by farmers during the course of plaguing were among the items displayed in the pavilion of the struggle for Eritrea’s independence.

While making tours, one could see a wooden artillery box with its base smeared with dough and to one’s surprise the wooden box was used as baking utensil. Huge shrapnel and others remnants of air bombardments were then used as water tanks. Any large enough shrapnel was also modified into any useful utensils.

Rifles, machine guns, heavy weapons, and photographs that depict the livelihood of the freedom fighters, the harsh war times, the unyielding and can do sprit of Eritreans is what makes the

pavilion a worth visiting site.

What makes the placing of and clearing off mines from different parts of Eritrea during the period of the struggle for independence difficult was that in addition to the regular arms, any freedom fighter who engaged in such activities had to carry a landmine that weighs about 15 kilograms for a number of kilometers.

The display of different mines and other equipment as well as the awareness raising briefings given to the observers of the exhibition was very instructive. Such exhibitions do not only tell about the past, but are informative about the extra care that needs to be done during an encounter with such destructive mines that are not yet cleared.

What one could see in the pavilion is creative ability of Eritrea’s freedom fighters. Despite the shortcomings they had, they were willing to make anything that see impossible-possible. With far traditional equipment the freedom fighters managed to service even the no way out situations and also saved lives of a number of civilians who would become victims of landmines.