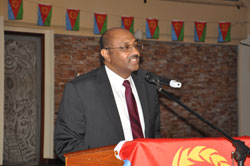 Speaking at the recent celebration in Kampala city, the Eritrean Ambassador to Uganda, Mr. Mohammed Suleiman, stated that the event is an occasion when nationals should reiterate their pledge of enhancing role in the nation-building process. He further advised the community members to become beneficiaries of the new investment prospects in the Homeland, and commended those who big contribution in organizing the event.

Meanwhile, in remarks he made at the celebration in Brussels, Belgium, Mr. Rusom Goitom, chairman of the Eritrean community in the country, indicated that the development accomplishments being registered in the Homeland amid external conspiracies attest to the prevalence of staunch resistance thereof. In the same vein, Mr. Negasi Kasa from the Eritrean Embassy made note of the way Eritrean nationals in the country and abroad hold aloft independence.

Furthermore, reports indicated that the events witnessed the staging of different activities including performances depicting cultural and national values.