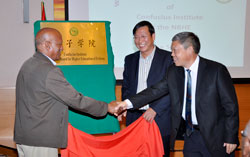 Confucius Institute has opened in Asmara on the basis of the agreement reached between Eritrea and the People’s Republic of China.

Asmara, 6 June 2013 – Confucius Institute has opened in Asmara on the basis of the agreement reached between Eritrea and the People’s Republic of China.

Speaking at the inauguration ceremony at Asmara Palace Hotel in which a number of Eritrean officials, the Chinese Ambassador to Eritrea, Mr. Niu Qing, and various Chinese academicians were present, the Minister of Education, Mr. Semere Rusom, stated that relations of partnership between the two countries has shown visible development, especially in the domains of education and culture.

Mr. Semere explained that Eritrea’s participation in the international cultural and artistic fairs sponsored by the PRC has been contributing significantly to exchange of experience between the two countries. He also indicated that the number of Eritrean youths being sent to China for further education is among the indicators of the growing relations of partnership, and that the opening of the institute is expected to foster the collaboration between the two countries.

Heading the Chinese team of academicians, Dr. Chen Houyi, President of Guizhou University of Finance and Economics, made note of the historic relations between Eritrea and China, and expressed conviction that the opening of such an institute would have remarkable impact in strengthening the ties between the two countries.

Dr. Tadese Mehari, Executive Director of the National Board of Higher Education, equally voiced conviction that the opening of an institute of this type would further Sino-Eritrean relations.

In the same vein, Ambassador Niu Qing pointed out that the institute is due to serve as a springboard to promoting societal bond between the two peoples.