Assessment of Eritrea’s Festivals of Yesterday, Today and Its Future Prospects Part II 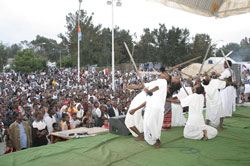 The way festivals are organized defers in any given society and thus besides having resemblance to festivals held around the world, Eritrean festivals of the pre and of the post-independence period have their uniqueness too. For instance, Eritrean festival in Bologna was the mouthpiece of all Eritreans and it used to serve a particular purpose mostly to reinforce the struggle for independence. Victories of the EPLF were then disseminated through different cultural shows. The demise of Nadow Command which was then the biggest of Ethiopian army and other such like victories were announced through songs and other cultural shows. The cultural shows staged back in late 1980s left a lasting impression in the minds of audiences who observed live performances and in the minds of those who watched it on national television after independence. Asong titled “Selalia”, for instance, describes the matchless victory of the EPLF in dismantling all units within the Nadow Command. The title of that song latter became nick name of its singer.

There are a number of festival types held in accordance to the customs and traditions of any given society. Some festivals are tribal and others are religious and there are of course secular festivals as well. Eritrea’s festival has a national characteristics and its impact in strengthening national unity still remains beyond compare. This being the fact, festival Eritrea has not yet broadened its scope. It is still confined as a national festival. Even though the nationalistic nature has its own positive impact, it still has its own limitations.

Including the 21 years in the post-independence period, national festivals have been held for a number of years. Taking in to account the number of years passed since the first festival, it was supposed to grow into international level so as to pave a way for the participation of neighboring countries. This and others could apparently be considered as the limitation of Eritrea’s festival.
Eritrean festival of the post-independence has been held within the premises of Expo groundswhich is in fact time and energy saving event where everybody observes diversified activities without the need to travel elsewhere. Despite its domestic nature, if we see Eritrea’s festival in terms the number of observers, it surpasses some festivals which are held at international level. The national festival has been visited by an average of 500,000 people each year.

There is no doubt what has been contributed through national festivals outweighs the limitations which need to be taken into account during the organization of future festivals. There are, however, issues that need to be addressed such as the display of too much items and the staging of too much cultural performances. Since observers do not have enough time to observe and appreciate all of the activities, it would have been better if the activities were compacted and also if extensive preparations were made to present them in much impressive manner. Despite the advances in information technology, the national festivals have not yet utilized such advantages.

Besides the cultural aspect of it, the national festival has been a platform for talented youths which helped them to come up with works of innovation and renovation each year. But, it has not yet grown into a desired level. The need for motivation, training and copy right issues need to be strengthened if the talented youth are going to make a difference.

Festival Eritrea is more of cultural investment and the other activities that have been staged in such events are just supplementary. The role of national festivals that continued to be held in the homeland has been very instrumental in cultural renaissance which is indeed the core of all advances that need to be implemented on the ground. The cultural aspect has therefore been the major area in which the national festivals contributed most.

Mr. DawitMehretab presented a paper which tries to compare national festival with that of form around the world in terms of economic, political, touristic and cultural aspects as well as highlights experiences of different countries in hosting festivals. Lack of training and assessmentin due time was also to be considered among the weak sides of national festivals.

Many of the aforementioned points were discussed in the conference which was held with an aim of strengthening national festivals in terms of scope and magnitude. The conference has indeed forwarded ideas that could help the nationalfestival become a platform which brings intact and comprehensive development.

Women’s role in colorfully hosting national festivals was also among the topics of discussion. It is evident that without full participation of women, the national festival could not have a lasting

impact. Participation of women in all events and particularly in the transfer of cultural values is incomputable to anything else.  Their participation in socialization activities and much more cultural issues is not only appreciable but national festivals could not succeed without the decisive roles they played in different programs. The role of women is not only necessary but there would be no festival without them is what MS. Halima Mohammed said in her presentation about women’s participation in all national festivals.

Festivals during the colonial era, festivals after independence including the domestic ones and those held each year by Eritrean communities in the abroad have a valuable impact in all national development endeavors. Therefore,the cultural aspect of festivals needs to outweigh everything for everything emanates from the culture itself. Nationality is among cultural values and if this is achieved other developments would definitely follow its path no matter of the ups and downs.

Besides the points mentioned in the above, the participants of the conference that was conducted form 6-to-7 June 2013, make extensive deliberations about the promotion of national festivals through the elimination of limitations. Thus, national festivals are expected to be held in a new manner if concerned bodies worked hard towards strengthening, expanding its scope and magnitude in all areas of activities.

Nurturing a team for organizational Development

“I dedicate all of my energy and enthusiasm to dance”