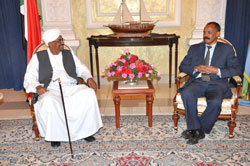 Presidents Isaias Afwerki and Field Marshal Omar Hassan Al-Beshir yesterday held the first round of talks at the State House focusing on fostering bilateral relations and issues of mutual interest to both countries.

Asmara, 14 June 2013 – Presidents Isaias Afwerki and Field Marshal Omar Hassan Al-Beshir yesterday held the first round of talks at the State House focusing on fostering bilateral relations and issues of mutual interest to both countries.

In line with the prevailing strong ties and cooperation, the two leaders conducted in-depth discussion pertaining to the reinforcement of programs that would give higher impetus to the existing bilateral cooperation in the domains of trade, transport, tourism, education and health.

Moreover, they agreed to further deepen and strengthen the on-going cooperation between the neighboring Eritrean and Sudanese regions under the guidance and follow-up of both leaders.

Meanwhile, President Omar Hassan Al-Beshir and members of his delegation today attended prayer service at Al-Khulafae Al-Rasheedin Mosque here in the capital in the company of Foreign Minister Osman Saleh. In remarks he made on the occasion, the President noted that the relations between the Eritrean and Sudanese peoples is historic, and that it plays vital role in ensuring the interests of both nations, as well as security of the region. The Sudanese President further asserted that the leadership of the two countries would exert the necessary effort towards elevating such relations to the highest level.

Moreover, President Omar Hassan Al-Beshir conducted a tour of the privately owned Zaer Textiles Factory, the Precast Factory in Asha-Golgol and Asmara Flowers in Mai-Sirwa. In the course of the tour, President Omar Al-Beshir received briefings by experts and managers regarding the activities of the firms and their future work plans.

The Foreign Minister of the Republic of Sudan, Mr. Ali Ahmed Kerti, told Erina that what the delegation witnessed during the tour attests to the vigorous endeavors being exerted by the Eritrean people and their leadership, as well as the investment being made on the basis of internal capacity.

It is to be recalled that on arrival at Asmara International Airport yesterday on a 3-day official visit, the Sudanese leader, Field Marshal Omar Hassan Al-Beshir, was accorded warm welcome by President Isaias Afwerki along with a Guard of Honor.

Fiction book based on armed struggle for independence inaugurated