The emblem of Eritrea 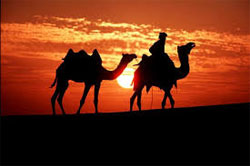 The Coat of arms of Eritrea was adopted 24 May 1993 on the occasion of the declaration of our independence. The emblem mainly depicts a camel surrounded by a wreath of laurel. In fact it shows a scene of a dromedary camel in the desert, which is surrounded by an olive wreath. The camel was the animal of load used during the war of independence to transport supplies and goods, and was seen as being instrumental to the movement’s success by Eritrean liberation fighters. The name of the country appears on a scroll towards the bottom of the emblem threefold, in Tigrinya, English and Arabic, of course these being the working languages of the country.

Camels were domesticated thousands of years ago by frankincense traders, who trained the gangly cud-chewer to make the long and arduous journey from southern Arabia to the northern regions of the Middle East, the camel went on to become the desert dwellers primary source of transport, shade, milk, meat, wool  and hides.

Nowadays, camels are valued more as thoroughbred racing animals and sentimental images of the past, the desert, and the mythical legends. But in some parts of Africa and Asia today, camels still pull ploughs, turn waterwheels and transport people and goods to market along desert routes impassible by wheeled vehicles. That is why Camels are sometimes called “ships of the desert.”
Some people think that camels are bad-tempered and obstinate creatures that spit and kick. In reality, it is just the contrary;they tend to be good-tempered, patient and intelligent. The moaning and bawling sound they make when they’re loaded up and have to rise to their feet is like the grunting and heavy breathing of a weight-lifter in action, not a sign of displeasure at having to do some work.

The specific and amazing characters of the camel is the fact that differently from most kinds of animals that store fat in their bodies, camels keep most of their fat in a hump.

Contrary to popular belief, a camel does not store water in its hump. They just need very little water if their regular diet contains good, moisture-rich pasture. The hump conserves fat. If food is hard to find, the fat in the hump provides energy for the animal. If a camel is starving thehump shrinks visibly. The hump may even slip off the animal’s back and hang down on its side. After the camel has had a few weeks’ rest and food, its hump becomes firm and plump again.

This characteristic are such as: Camels do not pant, and they perspire very little. Because the camel’s body temperature is often lower than air temperature, a group of resting camels will even avoid excessive heat by pressing against each other.

A camel’s ears are small, but its hearing is acute. They have beautiful eyes are protected by a double row of long curly eyelashes that also help keep out sand and dust, while thick bushy eyebrows shield the eyes from the desert sun.

Last but not least camels have long, strong legs. Powerful muscles in the upper part of the legs allow the animals to carry heavy loads for long distances.  A camel can carry weight as much as 450kg/990lbsand an average camel will typically cover 40km/25 miles a day.

Camels usually walk, especially if it is hot, but when they must go faster they either gallop or pace. The pace is a medium-speed movement in which both legs on the same side rise and fall together. This leg action produces a swaying, rocking motion that makes some riders “seasick.”

For the last 21 years people of Eritrea recognized the camel as our emblem. It is indeed rare to find such qualities in a desert animal.Apart for the fact that the camel was really helpful during the war itsamazing yet unusual characters makes it worth being recognized as our emblem.

“I dedicate all of my energy and enthusiasm to dance”

The Soviet Union and its world influence Part IV