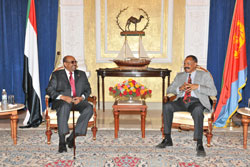 Following the meeting of the two leaders, Eritrea’s Foreign Minister, Mr. Osman Saleh, and Foreign Minister Ali Kerti of the Republic of Sudan told reporters that the visit of Field Marshal Omar Hassan Al-Beshir was successful, and that a joint committee has been set up to oversee the implementation of the projects underway on the basis of the understanding previously reached between the two countries.

Meanwhile, in continuation of the tour he conducted to different enterprises yesterday, President Omar Hassan Al-Beshir in the morning hours visited the Geographic Information System (GIS) Center here in the capital, during which he received briefings by managers and experts accompanied by video show.

The Sudanese leader left for home in the afternoon hours today concluding his 3-day official visit to Eritrea. He was seen off by President Isaias Afwerki, Ministers and the Sudanese Ambassador to Eritrea.

Number of health institutions in Anseba region witnesses over 5-fold increase in the past 22 years: Report