Voluntary blood donation in the country expressed on the increase 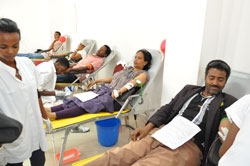 In a ceremony conducted on 16 June to mark International Day of Blood Donors it was expressed that voluntary blood donation in the country is increasing.

Asmara, 16 June 2013- In a ceremony conducted on 16 June to mark International Day of Blood Donors it was expressed that voluntary blood donation in the country is increasing.

During the ceremony conducted under the theme “Give Blood-Save Life”, Dr. Yifde-Amlak Tesfamariam, Director of National Blood Transfusion, indicated that blood donors in 2001 has been 68% and that currently due to awareness increase it has increased by 90%.

Mr. Samson Gebreselasie, chairman of blood donors association, on his part said that the objective of blood donation is to save lives, and called on citizens to join the association realizing its importance. He further commended the participation of high school and college students and other citizens that have been participating in donating blood.

Likewise, Ms. Amna Nur-Hushien, Minister of Health, pointed out that there is no donation surpassing that of saving life and that the ministry would live up to expectation to encourage blood donors.

During the occasion the Health Ministry donated 100 thousand Nakfa to the association.

Among donors Eng. Biniam Russom and Ms. Semhar Tesfai explained that donating blood will bring no health mishap to the donor, and called on every citizen and especially the youth to follow the noble endeavor.