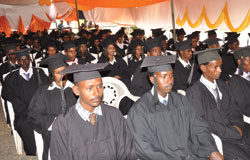 The Associate Nursing School in Barentu city graduated a total of 68 students with Certificate.

Barentu, 18 June 2013 – The Associate Nursing School in Barentu city graduated a total of 68 students with Certificate.

Speaking at the ceremony, Mr. Tomas Zerimariam, director of the school, indicated that the gradating batch demonstrated excellence during its one-year academic pursuit.

Also speaking on the occasion, Ms. Kidusan Abraha, coordinator of National Associate Nursing Schools, pointed out that the Ministry has been exerting endeavors towards enhancing health service on the basis of human resource development. She further called on the graduates to do their level best in their career.

Likewise, Mr. Yemane Haile, Acting head of policy and planning as well as human resource development in the Ministry, equally called on the graduates to serve the people with dedication.

A representative of the graduates expressed the group’s satisfaction with the free educational service accorded them at government expenditure, and asserted that they would demonstrate commitment in their career.

A total of 705 students have so far graduated from the Associate Nursing School, and the latest occasion constitutes the school’s 6th commencement.

Prevailing relations between the people and EDF members a virtue in the nation-building process, Say residents of Godaif area