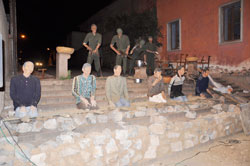 A sculptural display depicting the injustice of Ethiopian occupation forces was staged yesterday along the city center of Asmara.

Asmara, 19 June 2013 – A sculptural display depicting the injustice of Ethiopian occupation forces was staged yesterday along the city center of Asmara. The exhibition that highlights real experiences of mass slaughter of innocent people in She’ib, Anbori and Weki-Duba areas was inaugurated by Ms. Amna Mohammed Shimbilai, who was rescued surprisingly from the dreadful massacre in She’ib involving tank run over alive people numbering more than 400.

Among viewers, Mr. Mohammed Adem Mohammed, who lost his brothers and siblings during the act of carnage, said that the creative work portrays only part of the people’s insecurity the occupation forces had caused, and that such work of art is a sound approach towards bequeathing the national values in this connection.

Moreover, Ms. Amna stated that she, her 2 children and their age mates numbering 4 could avoid the mass killing through disguising themselves as dead bodies. She further expressed satisfaction with the creativity of the artistic work.

Mr. Gidei Gebremichael, artist, pointed out that the sculpture, whose preparation took about 7 months, was prepared in connection with the 25th commemoration of the incident in She’ib with a view to highlighting across generations the significance of such societal experience to the young generation.

The exhibition would remain open until the 23rd this month.