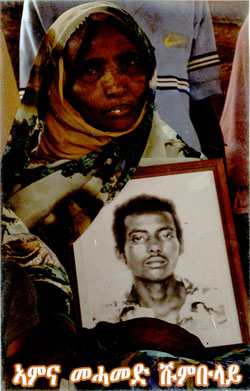 12 May 1988 She’eb witnessed a brutal carnage of its inhabitants. Tanks of Ethiopian forces mercilessly crashed a number of people. It was a no way out situation where no one could escape from the shelling of fires which targeted innocent civilians. A number of people were shot in an attempt to escape the bloody scene and thus 400 civilians were massacred by the wicked and blood thirst soldiers. There was no proper burial; the corpses became just meals to the greedy and scavenging hyenas of that particular area. Miraculously, MS. Amna Mohammed Shumblay along six children survived hiding among the corpses and covering themselves with blood smeared pieces of clothes.  She took the six children to liberated areas after traveling for about 40 kilometers. Two of the six children were her sons and two of the four children who remain parentless due to the hideous massacre were severely wounded. Sculptures depicting this and such like events of massacre have been staged in an open area in front of the Ministry of Education.

Artist Ghidey Ghebremichael has been making studies of the atrocities committed by the colonial powers and thus continues to translate them through sculptures so as to give a pictorial depiction of the pitiless acts that befall upon innocent Eritreans. The sculptures staged each year in front of the Ministry of Education depict visions of incidents which refuse to be shake off from the memories of every Eritrean who witnessed such brutal acts.

MS. Amina was fortunate enough to survive and share memories of a terrible past after 25 years. Artist Ghidey visited her in She’eb and gave her a chance to inaugurate his sculpture works titled “25 years after the Massacre of She’eb” that pictorially depict shocking incidents happened during the struggle for independence.

This patriotic mother saved six lives but one of her surviving brother who was then a 10 years old boy was martyred in the post-independence period in safeguarding his nation from vultures who launched war against Eritrea under the pretext of boarder dispute.

independence. To make them recall the flood of bloodsheds for the very national cause.

In this year’s commemoration of Martyrs Day, Ghidey has staged three works. The massacre of Weki-duba which happened in January 1975, the rescue mission of the EPLF in freeing the people of Anbori who were under enemy’s torture, and as mentioned earlier the massacre of She’eb in 1988. All the inhabitants of Anbori were seeking mercy from the heavens, and the merciless enemy forces were surrounding them to shoot and stab with knifes as were cattle but not humans. Hot tear mingled with hot blood has already drained from the victims who were in what seem endless nightmare. But, the gloomy situation of colonialism was once and forever overwhelmed with rejoice with the approaching of EPLF forces which was indeed a miracle and lifesaving incident to the inhabitants of Anbori.

The inhabitants of Weki-Duba also witnessed a hideous murder in 1975. Everybody including those who took sanctuary in the village’s church were shot dead. The enemy forced some of the inhabitants to make prayers outside of the church so as to have a clear target where they could easily shoot without missing. This way a number of people were killed including priests.

All the incidents included in the sculpture has not presented all the atrocities committed in its entirety. As regards this, Mr. Ghidey said “let alone to include some exaggerations and add-ons, the real incidents have not yet represented.” He is indeed right.  The vastness of what really happened on the ground could not be covered in such pieces of artistic works.

All the artistic works of Ghidey staged every year in commemorationof Martyrs Day -June 20 have a lasting impact not only in documenting history but also in bequeathing national values.

With the elapse of time and with lack of documentation there would be great possibility for a huge historical incident to be depreciated in to a tiny one. There are enormous historical events in the history of the Eritrean people most of which, however, not yet documented.

In retaliation to every defeat on the battle fields, the enemy forces were victimizing defenseless and non-armed innocent civilians.

Eternal glory to all martyred Eritreans!!

The candlelight vigil of 20th of June