The candlelight vigil of 20th of June 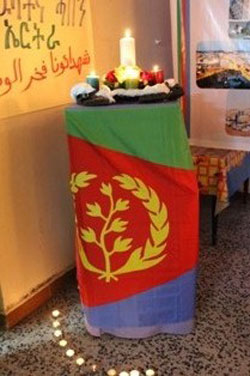 The commemoration of the martyrsthese last few days haven’t been easier then the previous years. Indeed it has been over 20 years since our independence has been achieved, and yet the sacrifice of our many brave combatants has marked and left scar in our hearts inevitably. This scar of our people is never forgotten and it deepens its position in our hearts more and more. It is a huge price that we paid to gain our liberty and it is engraved in our history and in our present. Whishing that the martyrs could actually watch over us, just then would they rest in peace knowing that their sacrifice wasn’t in vain, but it actually guaranteed us our freedom, peace, serenity and it also allowed us to walk proudly in our land.

The dearly price paid, during the three decades of armed struggle,is not only reminisced in Eritrea but it is profoundly and respectfully remembered by every living Eritrean around the world. What makes them true heroes is that during the war no one was expecting a personal reward; it wasn’t a war made for the country to gain territory, economical development nor was it for power over other populations but it was just war so that every Eritrean would be free and live in peace. It ultimate aim was freedom. When the cities and villages of Eritrea were under strict colonialism, those youngsters could have chosen to run but instead they decided to fight, to stand up on behalf of their people, and doing these they took into serious consideration the fact that a war is always dangerous and so they were well aware of the risk they were putting their lives in, but it never seemed to stop them.Amazing is the fact that even after the war went on for quite some time it would have been logical that people could have started to lose hope but on the contrary our people united fought always harder and became always stronger in achieving

Apart our sad moments for the loved ones we have lost, each and every one of us feels pride and honor in being the decedents of such brave heroes and heroines.  They have given us a lifetime gift, a gift you could never stop being grateful for, a gift that we are reminded of in every step we take. We are for ever grateful and no amount of words would ever be enough to explain the felling of freedom.

They have done their jobs and more than what was ever expected from them. And now may God rest theirs souls, it is our duty to maintain and take care of the gift they had donated us. Our freedom that was paid by their lives is fragile thing that must be strengthened by working hard on making our country stronger.
It is our right to see a respected and prosperous Eritrea. And it is entrusted to us to build this country from the ashes of the war.

It is with such responsibility and humble respect that every living Eritrean visits the Martyrs’ Cemetery every where in the country. Every year, on June 20, the living vows to keep the promise of building a prosperous Eritrea.

On the evening of the 19th of June people from all over the city joined in lighting up their candles and walk along the main road. Others stayed in their own neighborhood and lighted up light around the block. Of course they were some that chose to pass those long hours at home. The candle light vigil that would be griped in honor on the eve of the Martyrs Day is always heart filled with sadness and it is one of the most heartbreaking events ever. The hot tears of those mothers that have lost their kids and spouses could never be more desolated. It is the time in which silence becomes the loudest noise; it is the time in which you can’t even give your condolences because although they died for a good cause no words would be sufficient for the grieving mothers. It is a solemn oath of feeling responsible, an oath of keeping the promise aflame, an oath of loyalty, and a pledge of commitment.

The date was set after the horrific war with a devastating result that accrued during the 6th offensive in nineteen eighties. It was a grate loss with thousands of

martyrs.  Ever since then the date has been significant. In any day of the year you can be grateful to the martyrs, but on these couple of days the souls of our people arein deep memory, and the hours and the days are times during which Eritreans communicate by heart with their martyrs.

June is dedicated for the commemoration of our Martyrs. It is also the month in which the big rainy season starts. People commemorate and thank our martyrs for the important gift they gave us and hope for good rainy season so that abundant harvest would be collected.

The Soviet Union and its world influence Part V