Through their blood we got life 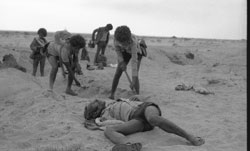 The Eritrean struggle for independence was one of the longest and toughest wars on the globe. The Eritrean liberation fighters had not only to fight against the immediate colonizer but also against its supporters and allies. The Ethiopian regime did any thing in its disposal to convince some super powers that the Eritrean people’s struggle was a struggle of separatist and sometimes they claimed that it was inspired by the Arabs for their interest. These and other allegations against the just struggle of the Eritrean people assisted the Ethiopian regimes to get supporters and sympathizers.

With all odds that was encountered by the Eritrean people has never deterred even for a minuet the commitment of the people and to the contrary hardened their will power to carry on the struggle until independence. It was, however, with heavy human and material losses.

hand of the enemy. The crimes and indiscriminate killing of innocents by the day hardened the fighting spirit of the people. One death was revenged my many fold of the enemy personnel and material.

Every liberation fighter was willing and ready to pay his/her life before his/her comrades. This imaginable readiness to pay life is a gesture of moral highness and courage. One could proudly claim that such willingness to sacrifice for one’s country and people is rarely found any where else. That is why every living Eritrean has a profound respect on our martyrs.

Though, our martyrs are living memory of every Eritrean every day, June 20 is indeed a special day. June 20 is dedicated to our martyrs to honor and remember their heroic deeds to free our country from the yokes of colonialism. The ultimate sacrifice one could pay is giving life for a cause. Our martyrs paid their dear life for us so that we live in peace.  It is the day that no Eritrean would afford to put away from his heart. It is the day were we remind our selves that we have paid more than we can afford to be free and suffered beyond limits to end suffering. June 20 is the day where we remember the heroes who spared their life- the most precious asset they own as humans, to end the plight of the Eritrean people.

The candle light that we lit every year on June 19 is to symbolize that our martyrs paid their life to give us light. A candle gives light while burning itself; likewise our martyrs burned themselves to give us light. What an enormous gift!  June 20 is also a day in which we renew our commitment to live up to their expectations. To build developed and prosperous Eritrea in which its people live in peace and harmony. To fulfill their ideals, vision and preserve their values. Moreover, we have the obligation to transfer their history, courage, dedication to the coming generation.

Keren city: Families of martyrs rehabilitated on the basis of business accommodations witnessing improvement of livelihood