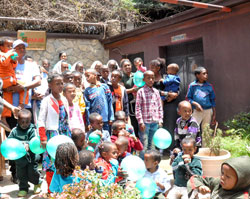 “The very first ever convention to be signed by the independent Eritrea was the convention on the rights of the child in 1991. This is a testimony that Eritrea is honoring to the maximum possible the articles and obligation of the convention.” Said Dr. Hamid ElBashir, UNICEF representative in Eritrea. He made this remark in a workshop held last week at Abrha Bahta School for the Blind in Asmara. The reason why Eritrea signed the convention on the rights of children before anything else stems from its desire to see children of this country reach a higher realm of achievement if provided with any possible assistance and more importantly if and only if their rights are respected.

During the launching of a report about the state of world Children (children with disabilities) 2013, which was held at Abrah Bahta School for the Blind, children with challenges made it clear that they are capable of doing what seems impossible. As regards the competence of children with challenges in different areas of studies and particularly in arts, Dr. Hamid said “I am not exaggerating, the very first time in my life to see a musical band of people with physical disability was back in 2002 in Sweden; and it is for the second time I am seeing it in Eritrea which I never thought is possible.” The performances of the children was quite impressive to which Dr. Hamid expresses admiration saying “I saw the deaf and blind, children with Down syndrome and autism playing wonderful role.”

No doubt, Eritrea gives utmost priority and works diligently to see the rights of all children are respected. What the country has done in educating children and children with disabilities in particular is very exemplary. Its commitment in respecting children’s right was evidenced from the due care that was extended towards children’s well-being in the liberated areas of pre-independence Eritrea.

Apart from the music performances and handcrafts exhibition, “I am blind but not my mind” was among the poems that were recited on the occasion. A drama which criticizes some rarely seen social barriers that relegate children with disabilities and which calls for the provision of equal opportunity at a community level was also staged. All the artistic shows performed by children with disabilities were indeed more than impressive and some of which were very touching. What has been invested towards providing proper ground for a better life to children with challenges was clearly seen from the shows that were staged. The output tells that there was a significant input towards changing the lives of children with challenges. That is why Dr. Hamid said “What we have seen this morning is not only touching our hearts but it also reflects the due attention, respect and care the government of Eritrea is giving to children with disabilities.”

There are three schools for children with disabilities at a national level two of which are in Asmara and the third one is in Keren; these are schools for the deaf, blind and autistic. The need for opening such like schools and expanding the provision of education opportunities to those in need is of course among necessity requisites so as to enable make major contributions at national, social and familial level. Enabling the children go to schools such as through providing them with bicycles and tricycles for those who can ride and assisting with other assistive martials for those who can’t ride is what is planned to be carried out in the near future with the cooperation of partners.

One could easily notice the respect and care the people and Government of Eritrea give towards people with disabilities by just observing people from all walks of life and particularly dignitaries and high ranking officials taking part in every occasion that addresses the challenges of people with disabilities. It is dueto such moral and occupational obligation that national associations, ambassadors, religious leaders’, ministers, higher ranking PFDJ officials and parents of children with disabilities took part in the official launching of a report about the state of world Children 2013.

Communicating and the Art of Getting together