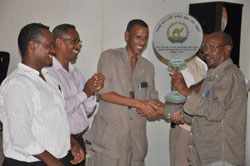 According to a report presented by the regional Holidays Coordinating Committee in the course of the handing ceremony, the 22nd Independence Day anniversary was marked in the region in a unique manner thanks to the integrated work of the sub-zonal Administrations. Cultural and artistic works staged during the event were also described gratifying.

Speaking on the occasion, the Administrator of Gash-Barka region, Mr. Mohammed Hamd, said that the fervor witnessed during the celebrations throughout the region attests to the way nationals cherish independence, and lauded the active participation of youth artists to this end.

The regional branches of the Public Technique Service and Red Sea Trading Corporation in the region won special awards, while the Administrations of Logo-Anseba, Goluj and Shambuko sub-zones received prizes for their outstanding accomplishment in exhibition. Moreover, the sub-zonal Administrations of Haikota, Tesenei and Shambuko received awards and certificates of merit from the regional Administrator and Maj. General Haile Samuel, Commander of the Western Command, for staging lively carnival shows.

In closing remarks, Maj. General Haile expressed appreciation for the celebrations in the region that they were community-centered, and called on the inhabitants to enhance participation in national development programs.