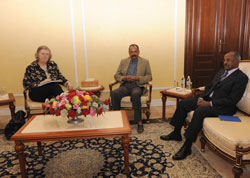 President Isaias Afwerki today received and held talks at the State House with the Special EU Representative in the Republic of Sudan and South Sudan, Dr. Rosalind Marsden.

Asmara, 4 July 2013 – President Isaias Afwerki today received and held talks at the State House with the Special EU Representative in the Republic of Sudan and South Sudan, Dr. Rosalind Marsden.

In the course of the meeting, both sides conducted extensive discussion targeting the necessary measures that need to be taken as regards ensuring peace and stability between the two Sudans, as well as developing close relations of partnership thereof.

Noting that the steps and methods pursued so far in connection with resolving the existing misunderstanding between the two countries did not produce the necessary outcome, President Isaias underlined the need to focus on comprehensive and strategic solutions rather than on fractional and temporary remedies.

Dr. Rosalind Marsden explained to the President that there exists similarity of views on the part of Eritrea and the European Union regarding the issue of the two Sudans as well as their bilateral relations.

President Isaias went on to explain that it is Eritrea’s expectation for the EU to make due contribution towards ensuring peace and stability in the Republic of Sudan and South Sudan, as well as the region as a whole.

The President and the EU official also agreed to continue engaging in joint consultation pertaining to the issue of both Sudans and other regional issues, besides issues of mutual interest.

Following the meeting, Dr. Rosalind Marsden told Erina that she obtained detailed information from President Isaias regarding the objective situation in the two Sudans and ways of promoting good-neighborly relations between them. She further indicated that the EU wishes to work closely with Eritrea towards ensuring peace and stability in the Republic of Sudan and South Sudan and the Horn region as a whole.

The Special EU Representative to both Sudans is expected to hold meetings with various Eritrean government officials in the course of her two-day visit.