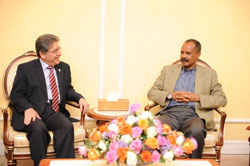 In the course of the meeting, both sides conducted in-depth discussion on ways and means of fostering the existing relations of partnership in the domains of trade, investment and public works.

President Isaias asserted Eritrea’s readiness to develop mutual cooperation with the Republic of Turkey in the sphere of trade and investment in marine transport as well as aviation.

Ambassador Fazil Corman explained on his part that cooperation would take place between the two countries in various sectors, especially in trade and investment, in addition to restoration of ancient Turkish buildings along the Eritrean Red Sea coast.

Following the meeting, the Turkish Ambassador told Erina that his country would open an Embassy in Eritrea shortly, and that it has already assigned an Ambassador. Moreover, he disclosed that Turkish Air Lines has decided to begin direct flight to Asmara, and that such a move would upgrade the relations of bilateral cooperation.