Why worry about a speck in your friend’s eye…….? 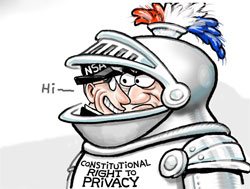 Recently a big drama is unfolding that caught the attention of the major media outlets. The US government is hunting what it says has blown out big secrets in history of spying in that country. Edward Snowden, an American 29 years and old and a senior advisor for the Central Intelligence Agency (CIA), is the alleged whistleblower. The allegation brought against him that he leaked vital information the US government is spying its own allies. The leak report has infuriated many western governments that have no clue that the US was spying on them. They are feeling their big ally has betrayed them.

Why did Mr. Snowden took that measure? In his own words, “When you see every thing, you see them on a more frequent basis, and you recognize that some of these things are actually abuses.” The abuse is not only against friendly states but also against citizens living inside the country. The National Security Agency specifically targets the communication networks of every one it thought is “dangerous” for the “national security”. Snowden in this regard says, “Where the communications will be picked up depends on the range of the senior networks and the authorities that analyst is empowered with. Not all analysts have the ability to target everything. But I, sitting at my desk, certainly had the authority to wiretap anyone, from anyone individual to the federal judge, to even the president, if I had a personal email.

The American “whistleblower did what he did owing the public of providing the vital information on what people or governments boasting that they are democracy but in reality are against it.

And he wants to reveal the motivation behind the people who make this disclosure that are outside of the democratic model.

We are being repeatedly told that democracy is all about freedom of speech, freedom of movement and by and large individuals have the right to do what they think it is right. However, Snowden reveals that contrary to what they advocate they say, “Tell the press about this and that thing, so the public is on our side”. By implication that means tell the public loads of lies and when lies are repeated several times they are likely to become truth. The demagogical words that “people have the right to decide” are but fake only used when on a podium with a microphone delivering nice words that are not existent in the real world.

The point of concern is not what Mr. Snowden did or what the US government is doing to bring him to “justice”. It is, why the very advocate of democracy is spying its people and other nation disregarding the right of privacy.

The irony is also the same people who are exercising act of contrary to the very essence they advocate others should not do. A single act of human rights violation they claim is being committed by others immediately becomes the center stage of their conglomerate media outlets. It is a kind of “do what the priest says and don’t do what he does”.

The Holy Scripture in this regard says, “Why worry about a speck in your friend’s eye when you have a log in yours”. I think the time has long passed for them to clean their mess before looking to the speck in others eyes.

“I think that our world revolves around numbers”