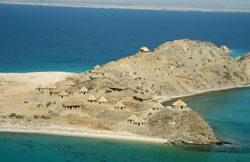 A frenzied sprawl of 1 million people Southern Red Sea Region is the third largest of the six regions of Eritrea and covers an area of 23,384 square kilometers of which 49 percent is plain land, 44 percent mountains and hills and the seven percent is of volcanic land. The western part of the region has an altitude of 500 to 2000meters; that has cool and moderate temperature and the eastern part stretches from zero up to 500 meters above sea level with a hot and dry temperature. The region has a coastline of 500 kilometers in the southern part of the Red Sea and includes 36 different sized islands. One of the Islands is Desei Island its location was one of the most important parts of the international waters—linking Africa and Asia.

The summer hit was setting behind The Grand Dahlak Hotel, and a massive shadow spread engulfing the plaza, I have wondered around the streets of different port cities in many countries, handled money to beggars. Massawa is much different; it’s clean, peaceful, old with its Ottoman Turkey structure yet young with its modern buildings. The view outside my window included wild birds and cats roaming near the hotel, a majestic caravan of camels marching by the beach, an empty plain sand beach that extends to the rugged coast, and 3,000 kilometers of open sea that separated me from Asia,. This is Desei Island located in the Northern Red Sea region of Eritrea.

Desei Island is located 2 hours by boat east of Massawa. The Association of Eritrean Americans in Asmara had organized a three day trip to Desei Island. Thirty five Eritrean Diasporas from the USA, England, Italy and Sweden had gathered at 5:00 AM set to travel to the Southern Red Sea Region. We toured the site we stayed for two days, camped, slept on the beach, danced and toured the island and its inhabitants. Desei Island is surrounded by coral reefs and pristine coastal lines. Swimming and scuba diving in the legendarily clear water was miraculous.

Our starting point was the Grand Dahlak Hotel much anticipated Georgian Ocean Hotel, where suits come with private gardens and pools, restaurant on roof top, outdoor and indoor, bar right by the Red sea, an outdoor swing pool parallel to the Sea, the interior of the hotel floor beautified by marbles of different colors and shape, lighting of magnificent chandlers it is a hotel of its own working. The hotel is furnished with high value furniture; mirrors and chandlers. One mind will be occupied by the damages one would have to pay if they broke one of the countless mirrors or chandlers.

From Grand Dahlak we started our voyage on the KARAMELA boat, an hour to our travel and prior to reaching the island we were escorted by dolphins. Seeing the dolphins to many of us was a first time thing and the kids on the boat were much amused by them. From a sailor’s vantage point at the wheel of Karamela one can see the scattered dwarf trees of Desei Island, its high rolling hills, the low houses, boats that lay in long decoration against its beaches. The town of Desei spreads along the island shoreline. A few perfect and unspoiled Victorian looking mansions, newly built of a lost era of sea going optimism emerge out of the sand wind on the towns sporadic hills. The sea wind drove sand steadily inland, tossing them against the aromatic trees and the sand settles on the hills with a gentle converge. The beaches sparkle with coral stone and sea bubbles. Dozen inlets, each with its pleasant instruct of sail bats and home ran the periphery of Desei an endless series of pristine anchorages.

Desei Island according to the inhabitants was a resting place for traders who traveled from Asia to the port cities of Zula and Adulis. The Island is seven kilometers long there are two developed area on the island; two kilometers apart the city of Desei and the Desei Resort Hotel. The Desei Resort hotel has 21 modern huts and 34 traditional hudmo one room hotel, restaurant, bar, convention hall and staff residence. Asian traders sailed in search of a passage, Desei the island only town provided resting area for a fleet of unflustered and one man gill netting boats. Desei’s sea has a brand of luxuriant beauty, enormous hills, soft white sands in every direction.

Desei Island is hot and dry it’s a place so isolated that no one who lives there can afford to make enemies. Be that as it may, it is home to proud inhabitants Afar; the Afar man is tall, dark skinned thick and strong through the torso. One can notice his attitude and the strength in his upper body, Nobel in appearance, his feature signify dignity very pleasant wearing a bushy hair with red strap and a formidable curved dagger known as a JILE strapped around his waist. The Afar man of Desei is a professional fisher man.

The life of an Afar woman is strenuous; it is hard work, the Afar woman out run the goats she herds and makes beautiful decorative artifacts form the sea shells she gathers and sell to visitors. The ladies of Desei Island were dresses flawlessly. She wears her olive ebony hair lay on her back and home made nickels around her neck, a neck that reminds one of alabaster. Her skin tone is ebony dark, the skin as smooth as ice-cream; attractive in a way that disturbs your emotions. Graceful with an elegant oval face smooth footed walk of a peasant, a narrow waist, small breasts dress in Lewet and sandals this is a beauty “Fit for a Queen”

The time spent on the isolated Island of Desei was full of excitement, diner was served, fish of different types, fresh catches were cleaned, fried, broiled and prepared in a special Afarian dip oven. The music was out of this world and the visit from the young Afar men was a pleasant surprise. As the night came to close most people stayed by the out door restaurant and took the night to their liking. A few of us went by the beach laying our feet in the sea water. A night of heat but with an onshore breeze at-times silent, next a rush of wind come up from off the sea; loud waves breaking on the beach. The moon had risen and hung just over hills, pale and indefinite, clouds that traveled the sky obscuring it. It was a night of passion with Mother Nature. At sun rise we realized we were in a land of beauty as we watched the red yellowish sun ray breaking through the sky. We took Karamela for a two kilometers voyage where we bought hand made jewelry, Ostrich eggs and different type of sea shell from the inhabitants of Desei Island.

As all good things have to come to an end, no one wishing to go back and left with no choice we sailed back to Masawa escorted by a family of dolphins. It was an experience and an adventure of a life time.