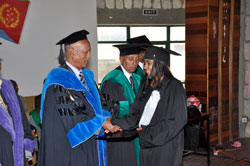 This month of the year is mostly dedicated to multi disciplinal harvest.Not only institutions of higher education havegraduated a number of students in different disciplines of study, but also vocational training centers have also graduated students who have been taking hands-on courses in different technical areas. This season is indeed a season of academic harvest. Fruits of hard-work have now been ripen and are now ready to be wisely utilized provided that the skilled human power is dispatched in accordance to the acquiredknow-how in respective fields of study. The graduation events have not been confined in colleges alone but regional admirations and administrative areas have also graduated a number of trainees in different disciplines and therefore this year’s commencements cover a wider rangeof areas of studies and trainings of different sorts.

The graduating classes of this year cover a vast area of specialties, some of which are from technical schools and others are from institutions of higher education and the rest are just from community colleges.

The former Asmara University which is now educating students of health sciences used to graduate not more than 1000 students. Asmara University was then the only higher institution of educationwhich could graduate the highest number of students. But the limited number of graduates have now been redoubled with the opening of new academic and technical institutions. One could wonder to see redoubled number of graduates each year starting as of 2008.

Most of the academic institutions opened in 2004 have held their sixth commencement. For instance, in this academic year a total of 1,193 students who have been attending diverse postgraduate and undergraduate courses at the Eritrea Institute of Technology (EIT) graduated on 4 July 2013.The present batch comprises 11 Masters, 403 Bachelor’s degree and 698 Diploma graduates.

On 6 July 2013, similarly in different fields of technology, Halai Technical School graduated 38 students in Machine Technology the 18 of whom are female students.During the occasion, Mr. Kebedom Tedla, director of the school, indicated that Halai Technical School which was established in 1966 under the name ‘Pavoni Technical Institute.’  In 2004, this very school graduated 151 students in the fields of Machine Technology and Computer Science in advanced diploma.

According to Mr. Kebedom, from 2004 –to- 2011 the schoolgraduated 816 students in Accounting, Library Science and Archives. Mr. Kebedom further explained that from 2012 onwards the

school continued to offer a two-year long certificate level technical trainingin Machine Technology under the name Halai Technical School. Students from Central region who completed grade 10 have been beneficiaries of such training programs.

The graduation events of this academic year have started late in June and every week one or two colleges have been holding commencements. College of Health Science which graduated a number of students in different fields of healthcare has,on 30th June 2013, become among the pioneers of this year’s commencement.

Halhale College of Business and Economics which started to give educational services since 2004 while temporarily situated within the premises of Eritrea Institute of Technology for about three years has also graduated,on 6th July 2013, a total of 362 students who have been pursuing their studies in degree and diploma programs in the fields of Finance, Accounting, Business Management, Economics, Marketing, Public Administration, Banking, Secretarial Science as well as Tourism and Hotel Management. 197 of the current batch graduated with degree, while the 165 are diploma-holders. The college is graduating for the sixth time, according to reports.

Denden Commercial School in Asmara which educates students in similar fields of studies with that of the college of Business and Economics has graduated on 1stJuly 2013 a total of 444 students who have been attending Accounting, Secretarial Science and Material Management courses at certificate level.

Technology related academic studies have been offered at Eritrea institute of technology and other technical and vocational training centers, agriculture related in Hamelmalo Agricultural College, marine resources related in MassawaCollege of Marine Science, health related in Asmara College of Health Science and in Orotta Medical School, as well as in Mendefera and Barentu nursing schools.

Since the colleges are evenly distributed throughout the country, the commencements that have been held in the months of June and July have a nationwide coverage.Hence, no wonder to hear a total of 600 teachers, 173 of whom comprise females, who have been attending a one-year certificate course in Asmara Community College of Education graduated on 6 July 2013 on the same day with that of the College of Business and Economics. 23 of the graduates are trained in Arabic language, and are expected to fill the gap as regards the existing shortage of teachers in the language. Besides, the college would start graduating teachers with diploma starting from next academic year.

Speaking on the commencement of Asmara Community College of Education, Dr. EstifanosHailemariam, dean of the college, congratulated the graduating batch, and said that the college is dedicated to equipping youths with the necessary knowledge, thus raising their input in the nation-building process and promoting the socio-economic wellbeing of the Eritrean society. He also disclosed that the college has sent 15 staff members abroad for further studies in Masters and Doctoral degrees.

All the graduation events cover multi-disciplinary areas of studies. Thus, a total of 387 students from Hamelmalo Agricultural College were also graduated on 5 July 2013 in diversified disciplines of agriculture.

As mentioned earlier this year’scommencements do not only cover institutions of higher education or colleges of vocational training alonebut regional administrations and offices of administrative areas have also been offering trainings to their staff members.   One should not be amazed to witness that 175 youths from Mendefera and its environs graduated on 7thJuly 2013 in the fields of Information Technology, Painting, Still and Video Camera shooting, Hair Dressing as well as in other disciplines.Reports indicated that last year’s training was provided for 200 youths in IT, Arabic language, Electricity Maintenance, Painting, Editing, and still and Video Camera shooting.

Similar to that of the trainings provided in Mendefera, the Administration of the Central region has organized training for a total of 800 staff members in Accounting and Material Management,

The overall commencements held so far in this academic year and the other commencements yet to come in the near future are multi-disciplinary in nature. Thus, the endeavors that have been exerted intraining human power in different fields of studies have continued to be realized with the graduation events that have been held every year. Owing to the academic and technical trainings that have been provided throughout the country, future prospect of human resource of this country have already started with flying colors. Thus, the witnessing of repeated commencements is a result of the continued inputs in the education sector of the country.