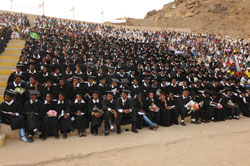 A number of students from Sawa Center for Vocational Training flocked to occupy seats provided for them. It is a salad day where the students enjoy the fruits of hard won success. The lengthy and black horizontal queue the graduates made in the lower stairs of Sawa stage seems an asphalted road and the white collars of their shirts seem as if zebra lines of a street. The gowns of the graduating class, the traditional wears of mothers, military uniforms of the 26th batch of national service, the waving of the national banner as well as other flags that hold the logo of National Service created a mosaic view.

The 6th commencement of the Center for Vocational Training (CEVOT) and the graduation of the 26th round of National Service was held on 13th July 2013 starting from 6:20 am.

The one-year long stay in Sawa has now come to an end and  so members of  the 26th batch of national service have successfully completed 8 months of academic and 4 months of military training. Simultaneously held was the 6th commencement of the vocational trainings that have been offered in Sawa in different fields of study. What is different in this 6th commencement is that the vocational training time has been extended from one to two years of study.

During the course of the twin commencements, 11 blocks of national service graduates demonstrated impressive military parade marching from the left side of the stage and right through the front of the stage where theyreceived applause and ululation from observers.

Six blocks comprising female marchers make strides chanting moral boosting songs they regularly use while in military training and while engaged in some tasks. A single block divides itself into four blocks and then united into one time and again in an impressiveway. Following the six blocks, male marchers in five blockstook part in the military parade accompanied by marching band. The overall military parade was accorded a befitting ululation of mothers.

Ninary a song in Afar language, which means our mother, by Rashid Hussien, member of the 26th batch of National Service, was staged. A group of male and female dancers in traditional wear of the Afar ethnic group make traditional dances in harmony with the beat and rhythm of the song.

During the graduation event, outstanding members of the 26th round of national service and also the graduating class from COVT received awards of excellence for what they have achieved in military and academic carrier respectively. Hence, Major General Philipos Weldeyohaness gave awards to the national service trainees who exhibited excellence in different activities of military training.  Students form CEVOT who exhibited excellence in their academic carrier also received awards from Mrs. Askalu Menkorios, Minister of Tourism and from Mr. Abrha Asfha, Minister of Public Works as well as from Mr. Semere Rusom, Minister of Education.

Musical drama staged by Msli cultural troupe of the Ministry of Education is all about the necessity of being complementary to one another. As everybody has  virtues and vices, the coming together of all virtues definitely makes a difference in bringing a mutual success is the message the drama tries to convey. The drama was both comedy as well as instructive. It just tries to reflect the different talents, the day-to-day interactions among students of Warsay Ykealo Senior Secondary School and the benefits one could gain from such social interactions which are marked by differences in views and attitudes and learning through experience.

It is to be recalled that CEVOT began to give vocational training to 12th grade students of Warsay Yikealo secondary school who did not score results that could help them join a tertiary education. Since 2007 it has been graduating students in different fields of studies. Including his year’s commencement, CEVOT has graduated for its 6th time.

After a successful completion of a two-year long hands-on technical, agricultural and business, and machinery courses, a total of 2,160 students from five schools of Sawa Vocational Training Center graduated at a certificate level. Of the total number of the graduating class 980 are female students.

Present on the occasion Mr. Tesfaldet Tekle, Director of CEVOT, indicated that the center for vocational training has so far graduated a total of 14,500 students who have been dispatched in different economic sectors of the country.

According to Mr. Tesfaldet the center for vocational training has charted out a plan to replace the existing educational machineries with new ones and to increase the number of courses from 17 -to-19 fields of study.

Representative of the graduation class said “Two years of course seem too long but we did it with flying colors thanks to the concerted efforts exerted by the Government, the center for vocational trainings as well as by parents.”

A drama by Wari cultural troupe was also among the performances which added color to the event. The drama is about equating values and virtues of the former generating to the current generation and of the current to the future generation. The comedy element of the drama made the observers burst into laughter. Morana- a song in Tigre language which highlights the power of unity in addressing any challenge was also staged.

In his speech the President said that the very reason for opening the center of vocational training in 2007 was aimed at realizing zero wastage of human power through enabling the trainees’ acquire knowledge, skill, experience and professionalism. The goal envisaged to be realized through the introduction of the vocation training was aimed at directing and judiciously utilizing the

acquired skills in work areas so as to bring tangible results through pragmatic works. Despite the envisaged goal the President said that 60% of this country’s human power has not been in use and thus the need for rearrangement is crucial in addressing such wastage.

After the official graduation event come to an end with the national anthem, President Isaias headed to observe an exhibition prepared by the new graduates of vocational training center.  Accompanied by Ministers and Army Commanders the President observed sample works the graduates displayed. The President then reminded the new graduates to translate what they have learnt into practice.