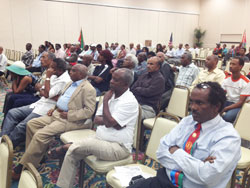 Eritrean community members in south-west California said that they would enhance participation in State affairs on the basis of raising organizational capacity.

Asmara, 16 July 2013 – Eritrean community members in south-west California said that they would enhance participation in State affairs on the basis of raising organizational capacity. The community members made the pledge at the respective meetings they conducted during which extensive briefings were given as regards the objective situation in the Homeland, besides the development accomplishments being registered.

Speaking at the meetings, Mr. Berhane Gebrehiwet, Executive of Eritrean Embassy Affairs in the country, pointed out that the nation has been exerting persistent endeavors towards promoting peace and stability in the Horn region, and shed light on Eritrea’s diplomatic ties with countries from Europe, Asia and Latin America. Moreover, he said that anti-Eritrea agenda has ended up in fiasco thanks to the people’s staunch resistance, and called on the nationals to become beneficiaries of the investment prospects in the Homeland, which gives major priority to the citizenry.

The 7-day event conducted in San Diego city witnessed the staging of several activities focusing on children and youths, besides sports contests.