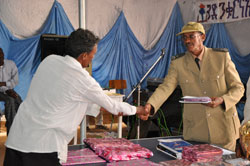 Reports indicated that academic and skill trainings have been conducted for prisoners in Tsetserat Prison and Rehabilitation Center.

Asmara, 17 July 2013 – Reports indicated that academic and skill trainings have been conducted for prisoners in Tsetserat Prison and Rehabilitation Center.

Speaking at the graduation ceremony this week, Maj. Semere Tekle, Commander of the Center, indicated that it has been striving to raise the production capacity of prisoners and nurture the necessary moral virtue among them. He further conveyed his good wish to those who sat for general and matriculation examinations.

Mr. Kifletsion Gebreyesus, head of prisoners’ affairs, equally pointed out that the Center has been exerting persistent efforts with a view to promoting academic competence of prisoners.
Moreover, Mr. Isaias Baire, director of the school in the Prison and Rehabilitation Center, disclosed that 14 prisoners have sat for this year’s General Examination. He also lauded the stakeholders who collaborated in organizing training courses for prisoners which include computer basics and tailoring.

Prisoners who demonstrated excellence in their academic pursuit and training received awards from Lt. Colonel Tewolde Gebreab, head of Administration in the National Prison and Rehabilitation Services.