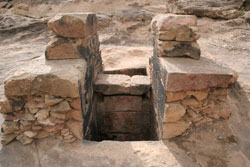 As we know the coming national festival is to be staged in Dekemhare, Southern region. During the festival thousands of Eritreans from inside the country and from abroad are expected to participate in the festival. Even though, the respective sub-zones are to display their history, culture and tradition during the festival, it worth mentioning that there are historical places nearby that could be visited and understand their history and enjoy the sites

The world is full of amazing sites both natural and man-made, harboring centuries-old history and boasting magnificent beauty. People travel to such places both for entertainment and research. Majority of those places are discovered by archeologists and historians but there are many that are still not known to the world and are waiting to be discovered.

Metera is an historical place is located 135Km south from the capital, Asmara, near the town of Senafe in the Southern Region. Metera also known as Belew-Kelew is believed to have been one of the busiest trade zones from around 7th BC to 7th AD. In the 1960’s excavation by French archeologist, Francis Anfrey, three churches and a lamp with a picture of a fox jumping on some other animal were found in this place. The excavation took ten years and before the findings of Francis there was only one 5m long obelisk and some broken ceramics that can be seen. The excavation revealed remnants of residential buildings of ancient princes, kings and religious leaders and their castle with their properties, valuable crosses used by the people living in this area in the 7th –

The obelisk of Metera is believed to be built in 3rd century AD during the Axumite Kingdom, and has engraved shapes of a crescent and the sun at the top with Ge’ez writing below it. According to the legend in the area, the scripture was written by King Ageza in memory of his brave ancestors.

There is also the village Metera named after one of the country’s highest mountains ‘Mount Metera’, 1km outside the city of Senafe. Here also are other historical sites, namely the monastery and an ancient tree. The tree has 12 branches and the tale in the village is that those twelve branches represent the 12 months of a year and the branches gave fruit accordingly. All the historical sites and findings in Metera indicate the Axumite and Pre-Axumite settlements in the area.

The Soviet Union and Its World Influence Part XI