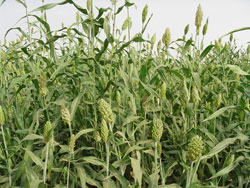 July comes every Eritrean farmer is busy sowing his plot of land with variety of crops. Farming activity is conducted in this part of the season expecting there would be abundant rainfall so that farmers collect bumper harvest during the harvest season that would follow the big rainy season. Eritrea is endowed with different climatic zones where different crops are cultivated.

The climate zones could be divided into central highland, western escarpment and the southern lowland. Each climate zone has different annual rainfall in terms of mm and that according to the amount of rainfall different crops are cultivated. The difference is that some crops need more rain and other less.

The central highlands of Eritrea, where much of the grain is produced, is characterised by low (though high-intensity) rainfall that limits the growing season to a length of 4–5 months, highly erodible soils and intense land use competition from pastoral activities. The cultural practices of Eritrean farmers, which appear to have changed little over hundreds of years, include cultivation by oxen, broadcasting of seed by hand and hand harvesting. Animal threshing of grain is still common in many of the agricultural areas. The crop and pasture residues are normally grazed, or used for fuel, thus leaving the soil exposed to wind and water erosion. With a need to achieve food security, the key to sustainable farming in Eritrea may be to develop agricultural systems based on conservation farming practices, within a farmer participatory framework, where indigenous knowledge systems are recognised and respected. This will need to be done by gradual incremental improvements that address both the socio-economic and technological barriers to systems improvement.

Be it the fact, however, Eritrean farmers are toiling in this part of the season cultivating their land. They don want to spare any time doing other activities rather than farming. All eyes and minds

of the farmers are concentrated on their land and pray for more rain to come.

Currently, in much places in the country, especially in the lowlands and southern plains machinery is involved in cultivation. Farmers could hire tractors for minimal cost to till their land. And many are using oxen for ploughing. In the lowland areas camels are involved as well.

This time of the year no special feasts are observed in the country side. Every farmer is concentrated on his/her land for cultivation in the hope that after good harvest sometime in September the usual communal feasts would follow.

Making Use of an Eye Opening Opportunity