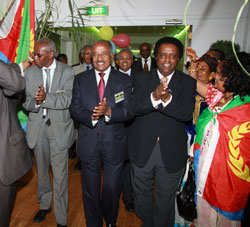 Eritrean community members in Holland conducted 12th annual festival this week with patriotic fervor in the presence of senior government officials and thousands of invited guests.

Speaking at the opening ceremony during which Foreign Minister Osman Saleh and Mr. Yemane Gebreab, Head of Political Affairs at the PFDJ, were present, Mr. Asefaw Tafla, chairman of the community’s holidays coordinating committee, said that the colorful event attests to the prevalence of the bond between the nationals and the Homeland. He further pointed out that it is being celebrated at a time when anti-Eritrea agendas have ended up in fiasco, while the nation is witnessing tangible development accomplishments.

In the same vein, Mr. Solomon Mehari, Eritrean Consul general in Holland, noted that the nation-building process calls for persistent endeavors, and asserted that the nation would register all-round development thanks to the steadfastness of its people. He also urged the community members to become beneficiaries of the new investment prospects in the Homeland on individual and group basis, besides sustaining their initiatives of backing families of martyrs.

A show depicting the legacy of national pride was staged during the opening ceremony targeting children and youths. Moreover, impressive performances by Walta Cultural Troupe added color to the event, according to reports.

Role of communities and the Army in national development programs a stepping stone to bright future, Say members of People’s Army