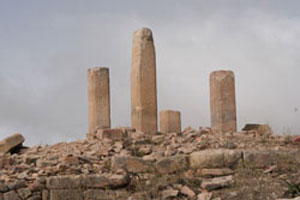 The Southern region is endowed with ancient and historical sites as well as ancient monasteries. These sites are located nearby to each other and easy for visitors to go around and visit them in not more than a week. Road accessibility and entertainment places are also available nearby.

The region being one of the most populated region the villages, towns and cities are very much concentrated and any one visitor had a big chance of getting help in any way needed. The hospitability is also there as it is any where else in the country. Hence visitors attending the national festival in Dekemhare will have better chance of enjoying the historical sites and ancient monasteries in the Southern region.

Kohaito is one of the historical sites that are attractive to visitors. This historical site is located 15km east from the town of Adi-Keih at an altitude of around 2,600 meters above sea level.

According to many archeologists, the area is one of ancient historical sites in Africa. Kohaito in Saho, one of the ethnic groups in Eritrea, means a place with many stones.

In this historical site there are 12 stone statues, four monarchies and an ancient dam. The dam also known as ‘Safira Dam’ is surrounded by stones, which have Ge’ez writings on them. This dam has been the source of water for the community of Kohaito for a long period of time. There is also Sabean writing in a flat stone found in the middle of the dam. Other historical sites in the area include the Egyptian tomb, where 70 mummified bodies were discovered in 1905-06. A German Professor, Steven Venik, once said that 31 of those corpses were taken to Germany and 29 of those are still found in German Museums.

There are also cave paintings in a place called Saro, including that of hump-less cow, and other farming equipment. Besides the number of historical sites in this area, it also has been an important route  to the Axumite kingdom due to its location half-way from the port city of that time, Adulis, to Axum, the kingdom’s capital. There are also remnants of dirt roads, small residential houses and mansions which indicate the living conditions of the society and the higher class of the society. Similar architectural sites including a dam and stone statues are found in the town of Tokonda’e.