“The Principled, Not the Sycophant, Shall Inherit the Earth” 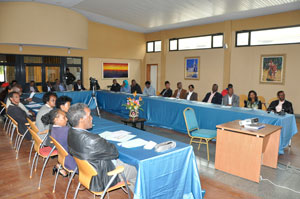 Workers are the vanguards of any sort of development that continues to be registered throughout the globe. If there is any achievement of economic growth in any given nation; such outcome persist to be of the toils and moils of workers. Every achievement is therefore reliant on the collaborative efforts of workers. The more workers work in unison, the more the effect of which would bring tangible and vibrant result. Recognizing the benefits of working in cooperation and addressing any challenge through united effort, and through sharing resources mutually, a number of organizations, associations, and parties have been founded  locally, regionally as well as globally. The Organization of African Trade Union Unity (OATUU) is among the regional organizations founded on the basis of maintaining a constructive partnership among workers and trade unions of member states.

Bearing in mind that a well-trained worker would definitely bring redoubled outcome in any work area, OATUU has charted out education program for African workers. According to the three-year long training program which was formally launched as of 22 March 2013, a total of 24.000 workers in ten African countries namely: Eritrea, Togo, Mali, Namibia, Libya, Egypt, Zimbabwe, Algeria, Congo-Brazzaville and Sudan would become beneficiaries as per the set out plan.

There is no doubt a partnership that favors mutual cooperation and mutual respect would bring fruitful outcome on the part of all affiliates. Eritrea and the National Confederation of Eritrean Workers (NCEW) strongly support in principle and in deed that a partnership which flourishes while being nurtured by goodwill and productive initiatives and believe that the end result of which is directed towards creating common benefits among countries in any region.

Thus, Eritrea took OATUU leadership position with dedication as of December 2012 in a congress held in Algeria. Since then NCEW has been working to maintain and strengthen the already exist ties with OATUU and to that end Mr. Ibrahim Abrar was elected for the post of General Treasure of the Organization of ten state members.

Any partner that believes in constructive engagement could not dictate to any of its partner as to whom shall that respective party would befriended with. As far as the partnership is based on constructive relationship, it doesn’t matter with whom that partnership is established. The partnership African countries could establish among organizations within Africa, or else with any continent or Africa as a whole with any country from around the world hence need to be guided by the principle of mutual cooperation but not as a relationship of a master and a subordinate. In this respect, Mr. Ibrahim Abrar said, at the commencement of National Leadership Seminar on African Workers Education held on July 16, 2013 in Asmara, that partnership with conditionality in not the sort of partnership OATUU is looking for. He then reiterated OATUU’s position saying “Our friends are our friends and our partners are our partners. We shall not trade one friend for another.”  He concludes the principle of OATUU’s friendship with a remark that states “OATUU does not accept the partnership of the horse and the horse rider.”

Eritrea and its workers association seek to be part of a full-fledged, able and authentic organization that does not endanger sovereign rights of any member state. The ties maintained between OATUU and All China Federation of Trade unions (ACFTU) is an exemplary partnership which stands for mutual cooperation where everyone gains from the end result.

The workers education program that would be carried out in the OATUU ten member countries is a joint education program between OATUU and ACFTU. Mr. Tekeste Baire, NCEW Secretary General indicated that NCEW has been organizing various workers training programs in partnership with several international organizations. He also said that the workers education program to be delivered by OATUU in Eritrea is intended to assist workers build their capacities and enhance the knowledge with the aim of contribution to their efforts to protect, defend and promote their rights and interests, as well as to contribute to the productivity of workers and the cultural development of the people at national and international levels.

According to Mr. Ibrahim the output envisaged to be met through the education program include enhanced knowledge of worker rights and interests by grassroots and workers and their leadership, increased membership and income for trade unions, strengthened trade unions manifested by quality and quantity of the services rendered to their members and to development of issues at regional and international levels.

The OATUU workers education program is to be carried in each of the member states. Thus, workers in each respective country will have a training opportunity within their homelands. The seminar that was held in Eritrea recently is therefore a continuation of such like seminars held in Accra, Ghana. As part of a series of the National Leadership seminars in ten member  countries, high delegation of OATUU and representatives of NCEW from the 6 regions of Eritrea took part in Asmara’s seminar and shared views as how to implement the education program in respective work places.

Strengthening the know-how of workers, and strengthening the functionality of workers associations and trade organizations is the primary aim of the education programs that are organized with the collaboration between OATUU and ACFTU.

Mr. John Kofi Takpo, OATUU Assistant Director Education/Research was also present in the seminar that was held in Eritrea.  He forwarded idea for discussion about the aims and objectives of the workers education program, education and educational methodologies, and also shared views on how to achieve the needs and targets, as well as about the expected outcomes by the end of the educational program. The participants of the seminar made extensive deliberations and shared views on the ideas set for discussion by OATUU’s assistant director of education and research.

The very desire of each member state to foster a win-win partnership is a positive development that could be expected to bring a promising outcome. The journey towards enabling African workers make due contribution through the enhancement of their capability has already started, however, the life span of this promising development should not be shortened through interventions of any sort. As Mr. Ibrahim stated while delivering a message from the OATUU, if any African organization is to flourish and succeed in its endeavors with flaying colors “The principled, not the sycophant, shall inherit the earth.”

I like to stand for the right of women